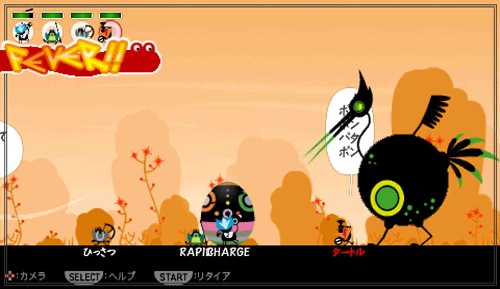 Patapon 2 was released in Japan last year, so American and European gamers have been waiting anxiously to find out when they can get their hands on the game.  Sony has announced an official launch date of May 5th, 2009 for the game.

If you've never played Patapon - well it really is quite unique.  You tap out drum beats on your PSP pad to launch different attacks by your little on screen dudes.

Patapon 2 will see a co-op mode for 4 players.  These special missions have players working together to capture an egg, deliver it safely, and then perform a ritual to hatch it.  Sounds like a pretty unique co-op experience.

We've posted a trailer for the game - but be warned - the song will be stuck in your head all day.  PATA PATA PATA PON!