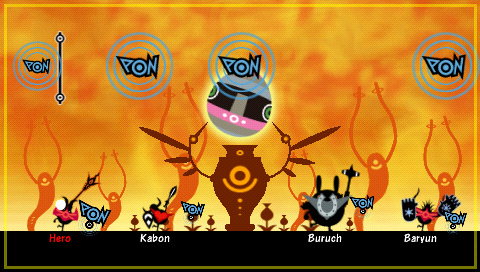 Patapon 2 is just a few weeks away from it's digital release on the PSP.  The PlayStation Blog has the details on the game's four player co-op mode called Bring the Mysterious Egg.

The way the mode works is simple, you have to bring an egg from point A to Point B with the help of three of your friends.  You won't have a Patapon army at your disposal in this mode, only the super powered friends by your side.  Along the way you'll face a boss or two as well as various obstacles, so team work is essential.

Once you and your merry band of Heroes beat all the obstacles before you, the game changes to “DON CHAKA” mode. Here you and your co-players rhythm are tested once again. By hitting the right drum beats at the right time, you will be awarded great riches that you can spend in single player. If you hit every beat, you crack the egg and get the secret that lies within!

Other co-op options include the ability to customize your character's weapons and items before each egg missions allowing each player to take up a defined role in this rhythm based game.

If your friends don't have a copy of Patapon 2 handy, you can use the PSP's game sharing feature to share the co-op mode and play on the go!  They'll even be able to get the unlocks and when they purchase the full game can use them.  That's pretty sweet.