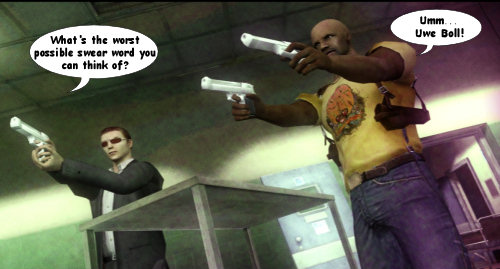 If you are looking for a great co-op game to play on the Wii with your 6 year old daughter;  well you might want to skip out on House of the Dead: Overkill.  You see, the game has set a world record in the Guinness Book of World Records 2009 Gamers Edition for most swearing in a video game...ever.

How much swearing is the most ever?  How about 189 instances of the dreaded F bomb.  To get an idea of how many friggin f-bombs that is; if you factor in the game's three hour length you'd get a rate of an F word a minute.  And that's not even including all the other "fun" words out there.

So how did the game's writer feel to receive such an honor?  Jonathan Burroughs, writer of The House of the Dead: Overkill, stated:

“It is a dubious honour to receive such an accolade working in an industry where so often the fruits of your labours are derided and dismissed for being puerile or irresponsible, but in the case of The House of the Dead: OVERKILL a little puerility was the order of business. Parodying the profane excess of grindhouse cinema was Headstrong Games’ objective and I am flattered that this record acknowledges that we not only rose to that challenge, but entirely exceeded it.”

A few swear words didn't hurt our thoughts on this mature cooperative experience.