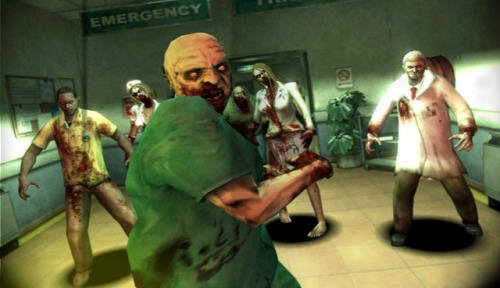 That's right, the 2 player co-op shooter for the Wii ooozes style.  With a film grain look, pops and scratches, and a new art style, the whole game is a semi-reboot of the series.  Sega created the game from the ground up to take advantage of the Wii hardware,  and while the game is still an on-rails shooter for the most part, there is some freedom in movement of the camera using the Wii-mote.   Unfortunately according to the Eurogamer preview, in it's current state, it's somewhat broken for co-op play.

Another new feature of the series are combos, which not only increase your score but seems to increase the gore with a "Gorgasm."  Yeah, I don't want to know what that is either.  Finally the game is said to have a pretty significant length, since this is the first House of the Dead title to skip the arcade cabinets.

We'll be keeping an eye on this one when it's released early next year.