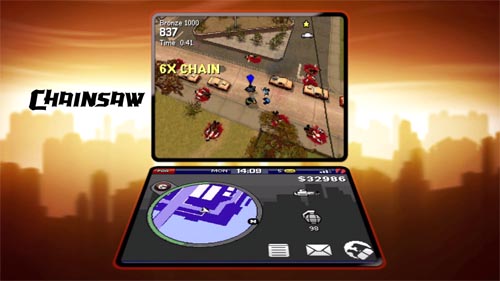 Grand Theft Auto: Chinatown Wars began shipping today for the Nintendo DS.  In a return to the series roots, players find themselves in a top down open world game set in Liberty City.  Co-Op fans may have noticed the back of the box mention our favorite game mode, but just how does it work?

The game actually features what seems to be becoming a standard in co-op games, a survival or horde mode.  In the Defend the Base mode,  two players can team up via local AD-HOC network to take on wave after wave of gangs.  Each wave becomes progressively harder as players compete for the high score in eight different scenarios.  Rockstar promises upcoming competitions and prizes via the Social Club website which is tied to the game.

Above and beyond this gameplay mode, GTA: Chinatown Wars features something we like to call Social Co-Op.  By exchanging those hard to remember friend codes, players can meet up using the Nintendo Wi-Fi connection in the game.  They'll be able to send text messages to each other, as well as sending waypoints to their friends to mark interesting missions and hidden objectives.

Another bonus about exchanging friend codes is the ability to trade guns, drugs, and money from your single player game.  That's right!  Your Nintendo DS is like your very own shady van in a back alley of a New York street.  I wonder if I can get a deal on stereo equipment too?