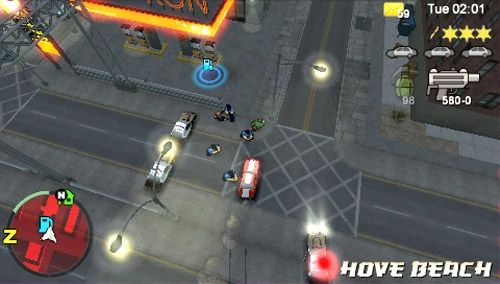 If you read our hands on impressions of Grand Theft Auto: Chinatown Wars for the PSP from PAX this year, you'd know we were surprised with not only how polished the game looked, but how Rockstar managed to adapt the Nintendo DS stylus controls to the PSP's analog stick.  After playing the final build of the game for a few hours I'm happy to report everything still holds true...mostly.

As a precursor, you may want to read our Nintendo DS review, as most of that still holds true for the PSP.  The PSP version of the game definitely plays to the system's strength, with the comic style cut scenes presented in crisp wide screen fashion and a revamped PDA that handles like the PlayStation's own XMB.  The biggest difference is in the definition of the in game graphics though, instead of a pixely 8-bit era looking game we have a game that is clearly 3d with full dynamic lighting.  Little touches like street lights and headlamps on the cars add so much to the game world, that when comparing it side by side with the DS version I was pretty astonished. The PSP and DS version side by side.  Same area.  Notice the lighting differences.

So what else is different?  Not a whole lot.  Rockstar added a bit more content to the game including new Rampage missions and a few additional narrative missions.  And while the replacement of analog stick actions for stylus actions works for most mini games, it does seem to "take you out" of the game.  That being said, one of the complaints I always had with the DS version was the constant need to manage the stylus, almost playing with one hand.  The PSP version has this absent.

Sadly there's no additional co-op modes, above and beyond what was in the DS version.  That is to say - not much.   You'll stand off in the Defend the Base mode with one other player, which is a bit like a survival mode, earning cash and stash to bring back to your single player game.  It's only available over local wi-fi, so you'll need another local buddy with the PSP version to play.

The PSP version still retains the social co-op aspects of the DS, linking your account to your Rockstar Social Club account for friends and stats.  There's even new web mini-games available that you can earn money in and transfer to your PSP.  Honestly there's no excuse to not play either version at this point.  In my opinion these are some of the finest and most well executed GTA experiences, and little things like the drug trading mini-games and Rampages make it incredibly addictive.