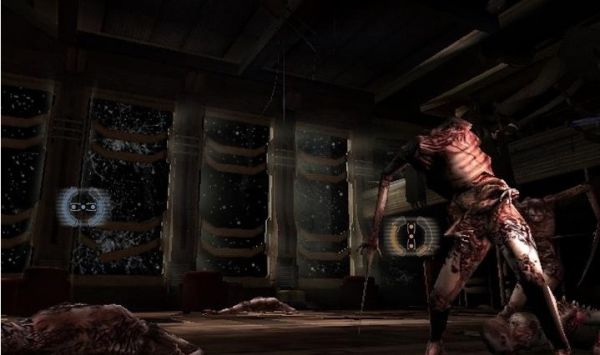 Deadspace Extraction is the upcoming Wii version of last years hit survival horror game from Electronic Arts.  While the original Xbox 360 and PlayStation 3 game was a third person shooter, the Wii version will play like an on rails shooter.  While some may balk at it, the game does support 2 player co-op, as evidence by the screen above.  Speaking of screens, the folks at Cinema Blend have gotten their hands on a few new screenshots and concept art for the game.

Skewed and Reviewed sat down with the game's executive producer to get the details on just what players would be experiencing.   The game takes place right before Isaac Clarke's arrival, and has players moving with the artifact to the location seen at the end of the original game.  The really amazing thing about Extraction is it's gameplay length is about the same as the original Dead Space - which I clocked in at about 8 hours of play.  That's a lot for a on rails shooter!

Finally the co-op is discussed, and thankfully we get true drop-in/drop-out support throughout the entire game for two players.  There's even a promise of new challenges in co-op.