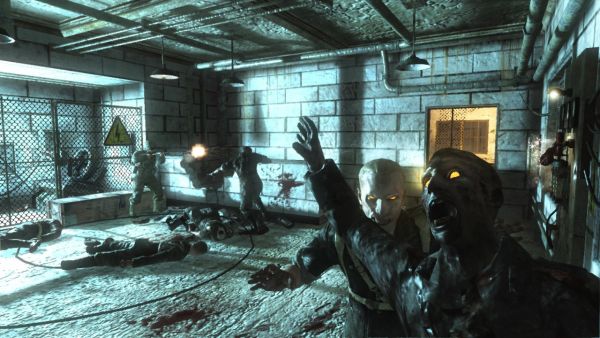 Yesterday, Map Pack 1 for Call of Duty: World at War went live, and Nazi Zombies burst from their graves around the world. Fortunately for us Xbox 360 zombie slayers, an immunity spread through the Live billing system, so we were completely unaffected by the invasion.

Today, the virus has overcome our temporary immunity, and we must now join PC and Playstation 3 gamers in the fight to defend from Nazi Zombies! All night they have scratched their way to the surface and shattered walls to get to us...we are outnumbered, but we will spend our last bullet sending the undead back to their coffins.

We have received word from another band of survivors that this new wave of flesh-eating fascists are the most intimidating yet! We have strategically placed resources in your vicinity to help you stay alive as long as possible.

Click "Read More" to see the latest official broadcast, and excerpts from the survivor's letter...

Up to four players are dropped in an abandoned hospital/asylum on Verrückt, two in each wing of the first floor. A power outage seals the electronic door between the two teams of players and suddenly zombies start crawling out of the ground in and around the hospital. Both teams have to shoot the undead Nazis down before they get to the barricaded doors and windows. Shooting Nazi zombies earns each team points which they can spend to repair barricades, buy weapons or open up blocked passages in the hospital. The goal is to get to the top floor, turn the power back on and join up with the other team to kill all the zombies.

The thrill of the level increases as you move up floors because you can no longer babysit the barricades on the first floor. Each new wave of zombies gets increasingly aggressive, even if there aren't necessarily more of them per wave. Eventually, zombies will work their way into the building and then it becomes Left4Dead – but with Nazis. You've got to stick with your teammates and constantly revive them if you want to stay alive. You can meet up with more survivors here. We'll reserve a shotgun for you.