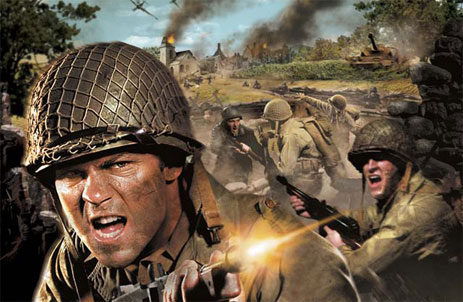 Some of you might know the famous "odd and even rule" in the Star Trek movies, where the odd-numbered movies are inferior to the even-numbered ones. Well, Call of Duty has a similar type of rule, with the Infinity Ward games being rather good and the Treyarch ones being not so good. However, Treyarch is trying to bridge the gap with Call of Duty: World At War and are making some decent strides. One of the strides is co-op, which pleases the crew here at Co-Optimus. The game is still set in WWII, but a recent article by 1up sounds promising. The article discusses some of the featTures, like a destructive flamethrower (and flammable things, like grass huts and people) and an exotic locale (the Pacific).

More important to us is the details regarding co-op in the game. The game features a Halo 3-like competitive co-op mode, where players compete to get the highest score (by killing baddies for points) while still working together as a team. However, the interesting part is that you can use said points on the online multiplayer, which is much like Call of Duty 4. Not much else is discussed about multiplayer or co-op, though competitive co-op is an interesting mode.