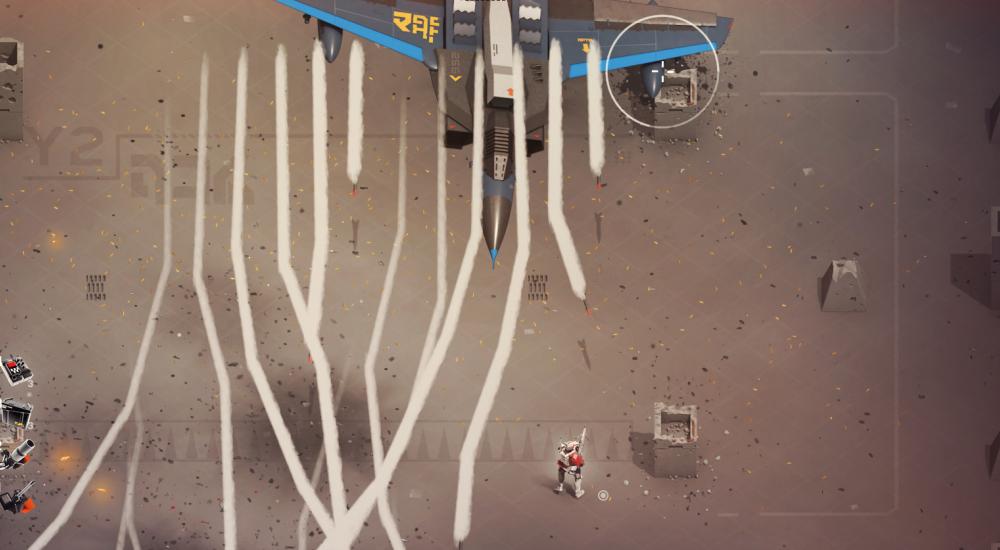 The second title we checked out during our "Co-Op Triple Header" stream on Monday was Flow Fire Games' top-down shooter SYNTHETIK. Nick and Locke did their best to keep up with our stream of questions for them while also manually ejecting clips and actively reloading their guns.

As a rogue-lite, top-down shooter, SYNTHETIK's core game loop is progressing as far as you can, level by level, until you either beat the final boss or get overwhelmed by enemy forces. There is a mix of temporary and permanent upgrades to acquire as you play, and finding new weapons lets you use them for the duration of your current run as well as making it possible for them to drop randomly in future runs. In the actual minute-to-minute gameplay, you have an on-screen reticle that shows the general area where your bullets will go and that area is affected by things like moving your character around, recoil, and getting hit by enemy fire. To put that final touch on things, in the midst of dodging bullets, rockets, and lasers while also maintaining your aim, you have to manually eject your current magazine and actively reload the next one. Oh, and your gun can jam on occasion. It's a lot, but it's all executed very well.

Nick's played the most of the game out of everyone on staff, and here's what he had to say about it:

A twin stick "reloader" is an interesting take on the action/shooter genre, but that's the focus on Synthetik. The constant risk/reward of reloading, using cover, and increasing aim removes the focus on twitchy speed and more on strategy. Adding in a second player makes the game feel downright tactical in nature.

One of the things I really liked about 10tons' Neon Chrome was how it emphasized careful play over twitch shooting. While SYNTHETIK doesn't quite move in that same direction, there's certainly a similar feeling there. I'll also go ahead and say that based on even this limited exposure to the game, I went ahead and bought it because it just looked that good. After a "quick" 30 minute run, I can safely say I'm ready for more.

SYNTHETIK is currently available on PC via Steam. Two player online co-op is supported in the main game mode.