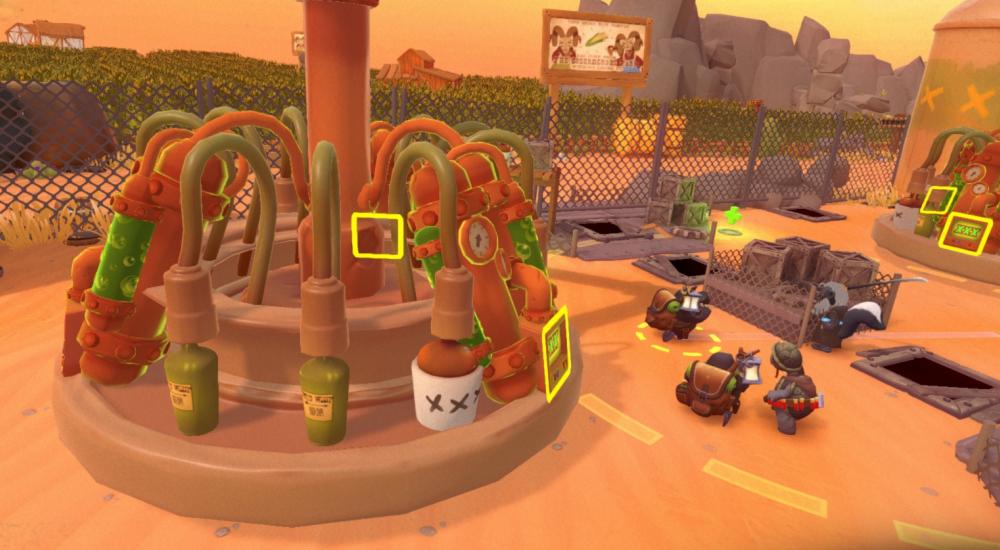 Closing out our trio of games from Monday was SCALPERS: Turtle and the Moonshine Gang. We looked at this game a year ago when it was still in Early Access and with its recent full release, we thought we'd hop back in to see how things have progressed. The good news is, I think we got better at the game? The bad news... it's got its share of rough spots.

To be fair, there are some good ideas and "hooks" in SCALPERS. The combat can get hectic at times and the lines, circles, etc. that indicate where and when enemies will attack provide you with a clear idea of where to position yourself in the midst of a firefight. There's also a kind of progression system for the four playable characters as well as the different guns and special abilities. These upgrades are all based on completing certain tasks, such as beating a boss on a particular difficulty level, but they can also be purchased through "loot boxes" that you can buy using in-game currency (there's no way to buy them otherwise, i.e., no microtransactions). While the progression mechanics provide you and your buddies with a reason to keep coming back... there's a lingering question if you really want to.

We made far better progress when playing the game this time around, which allowed us to see a bit more than we did (or could) while it was in Early Access. I think our general feeling after this particular session was that it's a pretty middle of the road twin-stick shooter. The progression mechanics, while appealing, also require either being really good at the game in order to unlock them normally, or a whole lot of grinding to get enough in-game gold to buy them. Bosses feel like bullet sponges even on the default difficulty, choosing certain weapons (like the close-range machete) makes certain sections of the game tougher than they would be otherwise, and one of the levels was such a chore to get through that we officially gave it its own title/acronym: "That One Level in SCALPERS Where Rocks Come Out of A Machine And You Destroy the Machine But They Still Come Out," or "TOLSWRCOAMAYMBTSCO" (pronounced "toll-swer-coh-am-maim-bit-scoh") for short.

I appreciate what the devs at A Sweet Studio tried to do with SCALPERS, and as I said before I think there are some good ideas here, but there's just a little more balancing to the bosses and a little more tweaking to the progression and levels to get it at a point that I think I'd say it was "fun."

SCALPERS: Turtle and the Moonshine Gang is available on PC via Steam. Four player local couch co-op or online co-op is supported.