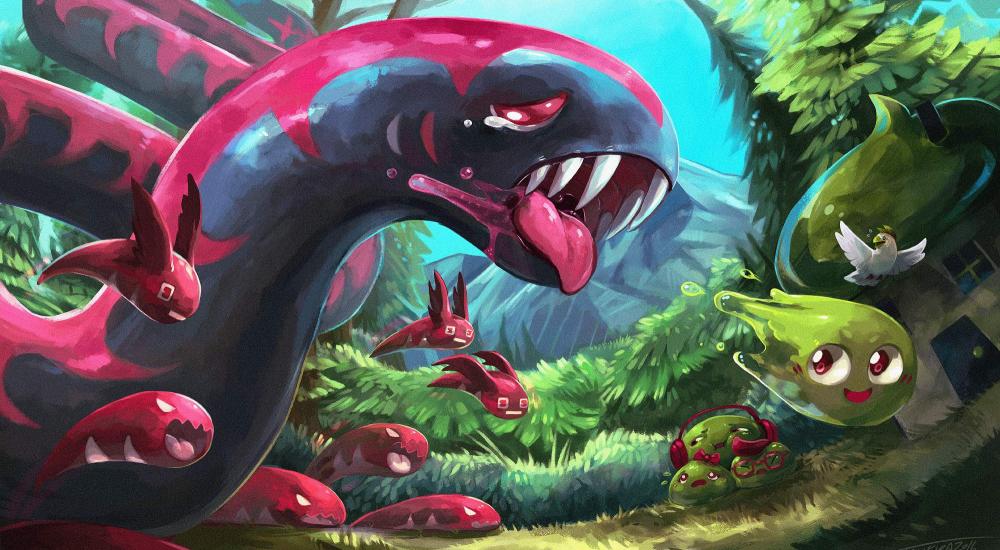 Having already debuted on Steam and Switch last year, Slime-san recently slimed its way to Xbox One and PlayStation 4 as Slime-san: Superslime Edition. A wonderful single-player platformer with distinct five-color visuals and bite-sized stages, Slime-san is also overflowing with content. That includes five retro arcade games, three of which have full 2-player local co-op support.

While Slime-san’s retro arcade games offer a nice little slice of co-op fun, you can’t jump straight into them. First you’ll have to make some progress in the primary single-player campaign. Slime-san has four campaigns, the main one containing five worlds with twenty stages each.

Among the twenty stages of every world, three contain secret exits. Take a secret exit and you’ll find a collectible coin and a new NPC to populate the game’s Slumptown hub. Don’t worry, you can tell which stages have secret exits by a coin icon that appears on the top-right corner of the stage on the stage select menu. The coins found in secret exits can be spent to unlock retro games inside the Slumptown arcade. It costs three coins per game and there are five games to unlock. All support 2-player local multiplayer, and three of the five are cooperative rather than competitive. So it’ll cost nine coins to unlock Slime-san’s full co-op goodness, which coin collectors will be able to do as early as the end of world 3 in the campaign.

The co-op minigames are: And the competitive minigames:

These minigames are decently fun, though you probably won’t spend more than half an hour with any of them. Players do need to accomplish high scores on each minigame to earn some of Slime-san’s 400 apples, another form of collectible. Doing so with a friend will certainly make those high scores easier to accomplish.

Slime-san: Superslime Edition sells for $14.99 on PlayStation 4, Xbox One, and PC. Slime-san is also on the Switch for $11.99 and includes the "Blackbird's Kraken" content with the "Sheeple's Sequel" arriving later this month for free.