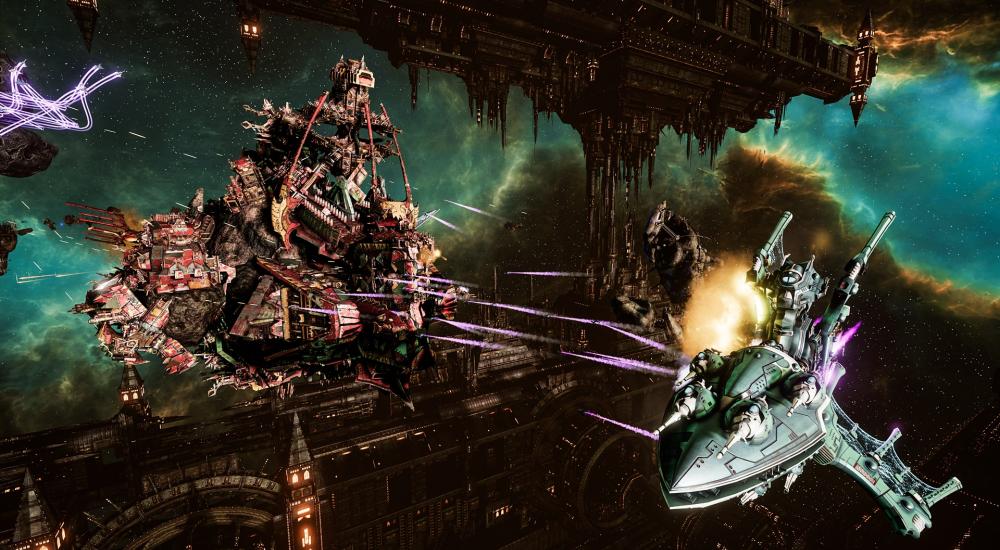 Tindalos Interactive's Battlefleet Gothic: Armada 2 launched last Thursday and despite the co-op campaign part still being in Early Access, Nick and Jason decided to enlist with the Imperium in order to see the sights and purge some xenos!

Similar to Creative Assembly's Total War: WARHAMMER games, Tindalos' aim with Battlefleet Gothic: Armada 2 seems to be to recreate the feeling of playing the tabletop game in a video game setting. Whereas the former is based on the well-known fantasy game, Armada 2 is based on a (now defunct) extension of the Warhammer 40,000 universe where players command a fleet of ships rather than units and armies. There are different classes of ships (e.g., destroyers, frigates, cruisers, battleships, etc) with different abilities and weapons that vary across the 12 different playable races (Imperial Navy, Space Marines, Adeptus Mechanicus, Necrons, Chaos, Aeldari Corsairs, Aeldari Craftworld, Drukhari [Dark Eldar], the T’au Merchant and Protector Fleets, Orks, and the Tyranids). The other key difference is  that whereas you would field huge armies in Warhammer and send whole blocks of units at one another, the fleets in Battlefleet Gothic are much smaller (usually between 5 to 10 ships) and require a greater amount of micromanagement if you hope to succeed in battle.

There are two types of battles in the game: Domination and Cruiser Clash. The latter requires you to destroy all opposing ships to win, while the former focuses more on capturing certain areas on the map and accruing points from thrm until someone reaches a certain threshold (though you can also just blow up the opposing ships and win that way). Victory in either of these requires a different approach/strategy depending on who you're playing as and against. The Drukhari, for instance, are very fragile in any kind of head-on combat against an Imperium opponent. In Crusier Clash, then, their best option is to shoot at the enemy ships from as far away as possible, do some damage, and then retreat into hiding thanks to their stealth fields. In Domination, they move much fast than Imperium ships so they can continue to move around the map and capture/recapture strategic points without having to do too much direct engagement.

There is far more to the combat and the different strategies you can employ for the different factions than I can get into here. Rather than spend time talking about how the Necrons' lack of shields but superior firepower mixed with their ability to regenerate hull damage and limited teleports for some interesting hit-and-run tactics, I'll just be focusing on what the campaign co-op entails. If you're interested in learning/using a particular faction, I definitely recommend hitting up the community guides on Steam and/or the official game forums. While the in-game tutorial (the "Prologue" chapter of the campaign) does its best to familiarize you with the controls and a few concepts, it's only focused on one faction (Imperium) and it doesn't offer much outside of the basics for how to move ships around and get into combat.

Regardless of which campaign you choose - if you're new, though, start with Imperium to get an understanding of the game - you'll have a single-player only battle to complete before you're taken into the Campaign Map. Once there, you can invite a friend to join your game. There's a bit more tutorializing and another single-player only battle in the Imperium campaign before you can invite someone, but you'll get there.

While the Multiplayer/"Battle" mode of Battlefleet Gothic: Armada 2 is entirely focused on you creating your own fleet and battling another player or an A.I. opponent (2 v 2 humans vs A.I. is currently not possible), the campaigns have a bit more to them in between the battling. You'll need to capture systems and prevent them from being taken over from enemy forces, manage resources in order to build new ships or repair existing ones, and "level up" points of interests in each system by spending resources to generate various benefits (like increasing the armor of all ships in your fleet). It's very "4X lite."

Most of these tasks can only be done by the host, which makes sense as all campaign progress is saved for the host only. The guest player can do exactly two things based on what we've seen so far: move fleets from one system to another, and spend resources to repair fleets. Here's where some of the "this feature is still in Early Access" becomes apparent. While those couple of things are all the guest player can do (for now at least), there's no great indication of any of that. The guest can click on any fleet or point of interest they want, which prevents the host from being able to select or interact with it, and the host can only tell because of a faint red outline around that object. What's more, there's no way for players to communicate in-game while they're on the Campaign Map so you can't even send a quick message of "I'll move that fleet to the Demios system." Additionally, there are certain features, like adding ships to a fleet, the guest can access, but then when they try to actually complete that action, nothing happens. Ideally, some of these things will be fixed by the time the co-op leaves "Early Access" in a couple months.

Even though the co-op setup for 4X part of the campaign isn't ideal right now, the co-op within the battles themselves is great. The host player can assign control of each ship to themselves, the guest player, or both; once control is given and the battle starts, though, there's no changing it. Personally, I found splitting control of my fleet the ideal way to play. The few battles I played were easy enough to win, but it always felt like a lot to try and manage, and I knew there were things I wasn't doing with some of my ships that I should been. Teaming up with someone let me focus in on just a handful of ships at a time and get to learn their abilities and when/how to use them more easily than when I was playing on my own. This method of divvying up forces also works well if there's a familiarity imbalance between players, i.e., one person has put in hundreds of hours and the other is just starting off. The more seasoned player can help guide the other and point out different tactics to use and when to use special abilities. This would be easier if you could still slow down or pause the action like you can in single-player, but it's understandable why that particular feature is taken out of the co-op.

Ever since I played the first Total War: WARHAMMER game, I've been yearning for a similar treatment of Warhammer 40,000 (I'd also take a Warhammer 40k game in the style of Vermintide). Battlefleet Gothic: Armada 2 is the closest we've gotten so far, and I'm definitely enjoying the care and depth to which Tindalos Interactive has gone to not only recreate the feeling of a tabletop game, but also make a pretty good naval warfare sim. There's a great deal of depth to the combat, particularly if you opt to play as one of the non-human races, and it's always satisfying to go "full speed ahead" into another ship. While the co-op for the strategy/Campaign Map portions of the campaign need a little bit of fine tuning, the actual fleet vs fleet battles are satisfying to play with a buddy and, in my view, the best way to go.