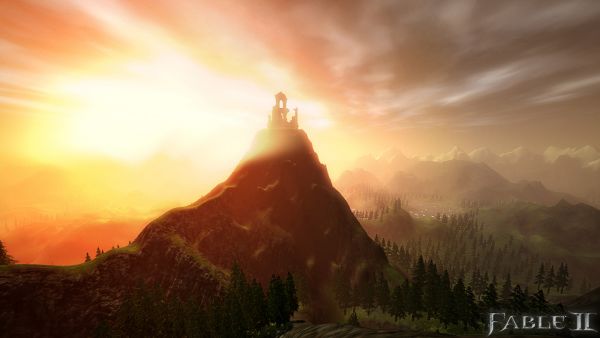 Lionhead has priced and dated the next set of downloadable content for Fable 2.  The See the Future pack will be released this May for 560

and once again will require players to download the free update pack if they wish to play with someone who purchased it in co-op.

In “See the Future,” players will be given the chance to heed the call for a hero to restore color and balance to the world, or let Albion fall to the wayside. Those who emerge victorious will receive the ultimate reward: a quest that provides a vision of Albion’s future and what lies ahead for those born into the heroic bloodline. The fantastical new quests in “See the Future” will bring players face-to-face with new characters, creatures, events and legendary artifacts

To me it almost sounds as if the game will give players a glimpse at Fable 3.  Another interesting addition to this DLC is the ability to change the breed of your dog!  What's the chance that they'll have a puggle?  In addition to the new breeds, players will have new hairstyles, make-up, hero expressions and dog tricks to enjoy with their friends.

Murgo: Having first met him during the childhood sequence of “Fable II,” Murgo returns to Bowerstone Market to bring an amazing array of new wares, including potions that can transform canine companions into new breeds.

The Ghosts of the Snowglobe Quest: Holding a disturbing secret, the small model village inside it was once a real town in Albion. The people who once inhabited it are now ghosts condemned to endless torment until the shadowy threat that cursed them is defeated.

The Cursed Knight Quest: Forever banished to a land beyond the dead, the Cursed Knight awaits a hero who has the strength and will to dress up in convincing costumes, even imitating a hobbe or balverine, to save him from his fate.

The Colosseum: The Colosseum puts even the Crucible to shame. Only the greatest heroes have triumphed here. Players’ abilities will be put to the test to prove themselves in combat once and for all, to win the ultimate in prizes.

More info can be found at the official site.