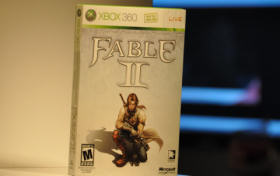 As I perused around Microsoft's "In the (K)now event" I took in the sights.  There were Zunes, Computers, Software, Mice, Giant TVs and of course games.  You had your Rock Band 2 with Ion Drum Kit, and you had Fallout 3 running on an Alienware Laptop.  You had Madden and Lips and LEGO Batman.  But then something caught my eye.  It was bright, colorful, and it glittered like goooooold.  It was Fable 2, and it was calling me.  Like a fat kid who eyes a giant lollipop I immediately made my move for it.

As I sat down to play and explained to the Microsoft representative who and where I was from, he immediately said - "Hey, want me to join in?"  Of course the answer was a resounding yes and all he had to do was press a button and presto, you have options to bring in a hench-person.  Right away both players have a few options to tinker with.  Your partner has the ability to create a quick character on the fly, cycling through various models, attributes and alignments.  My partner chose a good aligned, um...endowed...female character who was proficient with guns.  As the host, you have some options to tweak as well, like how to split up the game's loot.  You can divide everything 50/50, or simply adjust the sliders to your liking for both Gold and Renown (Fame).  This is a great option for players who have a partner that just want to play the game for fun, it'll let you horde everything for yourself!  MINE MINE MINE!

On a related note, I was told that if the player joining the game had a profile with a saved game in Fable, the henchman would take on the characteristics of that player's Fable 2 character.  After leaving the world all the gold and renown would transfer back to that persons saved game. 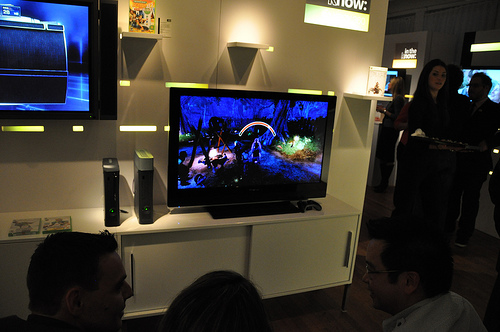 All that literally took us a few seconds to go through and get up and running and playing.  We started our adventure right after the main character hit young adulthood, the core of the game was just beginning to take place.  This was still a tutorial type area, and I won't spoil anything for you, but you are guided by a familiar character from Fable 1 throughout your quest.  It was a nice touch.  We trekked through the night in Albion through lush fields with swaying grass littered with dancing fireflies.  "You really should see this during the day, it's absolutely gorgeous,"  said the representative.  My reply? "This is beautiful right now."
Fable 2 cycles between day and night, as well as cycles through seasons.  So not only is the game going to be gorgeous, it'll have a lot of variety in the areas you frequently visit depending on the time you visit.
So we hit our first quest, trudging deeper into a cavern filled with swarms of beetles.  Combat is simple, yet satisfying.  The more you use your skills, the better you get at them and the more options become available to you.  You only ever need 3 buttons for combat; X for melee, Y for range, and B for magic.  Just like all the attacks, magic is context sensitive, but it has a few ways to modify it.  For instance, with the fireball spell you can tap the B button and a ring of fire will radiate out from you.  But if you hold the B button and flick the stick it'll cast a quick fireball in that direction.  Hold both the stick and the B button and you'll charge up an even more powerful fireball.  The few magic attacks I saw were really pretty, especially at night time as the lightning effects danced off of the in game world.
At this point I smiled, handed the controller back and thanked him for the playtime.  Even though we played for a good twenty minutes, I was asked "Done Already?"
"This is too much of a tease, I knew I wanted this game, I just didn't know how bad,"  I replied.  October 21st can't come soon enough.
Co-Optimus Game Page:  Fable 2
Other Co-Optimus Articles about Fable 2