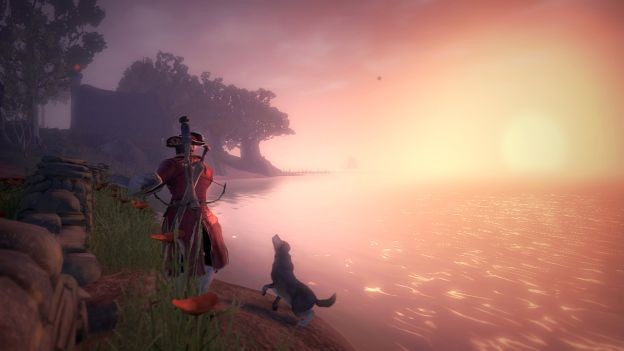 Fable 2 edged out many other excellent co-op titles to take the bottom spot on our Top 5 Upcoming Co-Op Games list.  As we approach the game's release late next month, a whole slew of information has been released.

First up is a detailed hands on preview from 1UP.  Two lucky testers got to spend three hours with the game.  One chose the good path, the other evil.  Even so early in the game, the experiences offered to each player were significantly different.  You can be a hammer-wielding necromancer, too, so that is certainly a plus.  No word on whether the "good" version of the game includes more rainbows is yet available, though.

Next, Peter Molyneux himself was interviewed by TVG.  However, the game's creator ended up asking more questions of the lucky interviewer, who had just played a preview build of the game for a couple hours.  Molyneux does manage to drop this nice bit about the "co-op orbs":

Some very interesting things have come out of the orbs. For a start, we're storing everybody in the whole world when they're playing single-player co-op. Where they are in the world, their story, and details about their hero is being stored centrally in a server, and then up to 64 of those is being filtered down into your machine. We filter them by your friends, Gamerscores, by where people are in the story, and where they are geographically around you.

You can then see these people floating through the world and you know that's where they are in their world. What that means is you kind of want to show off and I've seen people do it. They'll walk up and say, 'Hey, can I do this bit of the game with you so I can see what it's like to do the evil or good bit?' And so it allows people to dip in and out of other people's worlds and only then do you really appreciate the differences. That ambient orb stuff is pretty cool, it really is. I've never seen anything like it before.

Finally, CVG presents a list of all of Fable 2's flaws... according to Molyneux!  You've got to appreciate his frankness, for sure.  Among the flaws he mentions are bad lip syncing and a "fractured" dog.  I think these sound pretty minor, but I wonder, ss he talking about his game, or a Milli Vanilli concert?  In all seriousness, each of these articles is definitely worth reading, and we'll keep you posted on more news in the weeks to come here at Co-Optimus.