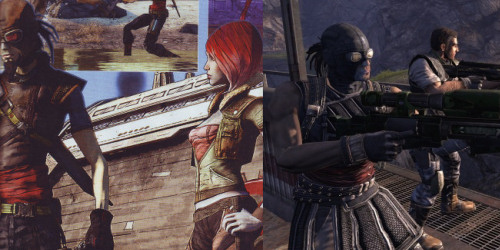 It appears as though the four player co-op Borderlands has gone from a realistic rendering look to a more artistic cell shaded technique.  The shot above shows a comparison between Borderlands new cell shaded look (left) and the old look (right).  The change is of course, controversial, it is the Internet after all.  A Gearbox employee on the official forums has addressed the issue, confirming the game has undergone a graphical overhaul.

"Though there's always the chance some people could be turned off by the style, it was decided that, overall, it fits the game and creates a more visually interesting experience," said ennui, "Our concept art had this incredible, distinctive style and feel that fit so perfectly - the game has not become less detailed or washed out at all. Rather, it retains the detail and style that's often lost when we move from concept art to 3D."

This definitely holds true, concept art is often beautiful, worthy of hanging on your living room wall.  Once a game is fully created in 3D, something always gets lost in the translation.  The new look really adds a certain character to the game, even from the small little shot we've gotten from a magazine scan.

The game is still on track for a release later this year on the Xbox 360, PlayStation 3 and PC.  I'm now even more excited for this one!  Four player co-op riding through the wasteland Mad Max style is on everyone's fantasy list.

Update:  So more info has come to surface.  Gearbox's Randy Pitchford has stated that while it appears to look cell shaded, that's not exactly the rendering technique used.  Randy stated the game is a gritty serious world and the cell shading technique just wouldn't work.  He said it's a bit more artistic.

Finally Randy said to watch http://www.borderlandsthegame.com for more info soon as all will be unveiled.