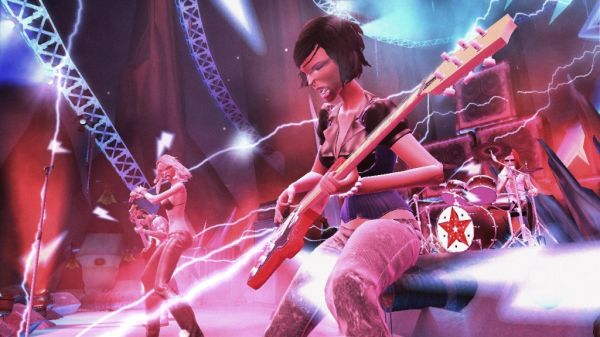 The recently renamed Guitar Hero Smash Hits is coming to consoles in June.  Smash Hits is a compilation of songs from previous Guitar Hero games, this time with full four player band support, adding in drum and singing parts.  Tunes from Guitar Hero 1, 2 and 3, plus the Rocks the 80s expansion, will be included.  A total of 48 songs will make their way onto the Smash Hits setlist.

Right now, the official Guitar Hero Smash Hits site is running a poll, where voters can choose which setlist they would like to see revealed first.  Each Thursday, the game with the most votes will have the songs it has represented in Smash Hits revealed.  As of this writing, the one that started it all, the first Guitar Hero, is in the lead, with GH III in a distant second.

I was initially turned off by the announcement of this game, but the allure of GH1 and GH 80s songs that I can't play on my Xbox 360 is hard to ignore.  Let's hope that Pantera and Blue Oyster Cult are going to be on the Smash Hits lineup!  The full list of already revealed songs is listed below.