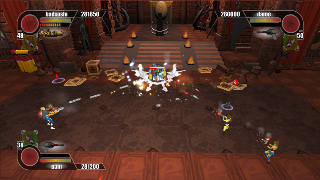 The next chapter of Capcom’s Rocketmen: Axis of Evil is coming! Rocketmen: It Came from Your Uranus, an expansion to the original digitally-distributed title, will be available through Xbox LIVE Arcade and the PlayStation Network Store on Wednesday, May 14 and Thursday, May 15 respectively. For 400 points on Xbox LIVE or $4.95 on PlayStation Network, Rocketmen fans will have access to new maps, weapons, and enemies.

It seems that Capcom accidentally revealed the expansion, though this is far from common in our modern gaming world. However, accidentally revealed or not, the expansion, which adds three new weapons, two new secondary weapons, a few new levels, as well as many new enemies, is arriving shortly. For a quick recap on Rocketmen, check out our review for the original game.