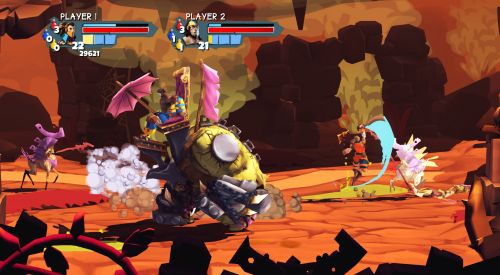 The latest Games with Gold titles have been revealed and there are two co-op titles among them: Sacred Citadel and Gears of War 2. Both are the Xbox 360 versions of the game, but they will work with the Xbox One thanks to the Backwards Compatibility program.

Sacred Citadel is a side-scrolling beat 'em up set in the same universe/lore as the Sacred series of games. Players can choose from four different characters - warrior, ranger, shaman, and mage - and can level up these characters and acquire new equipment for them as you progress through the story. The title supports three players either locally or online.

Gears of War 2 is the second title in the series and introduced the (now) familiar "Horde mode." The entire campaign can be played with two players, locally or online, and the Horde mode supports up to five online players.

Both of these titles can be picked up for free this month if you're an Xbox Live Gold member. Simply head over to the Xbox Marketplace, sign in, and tell them to download to your console.