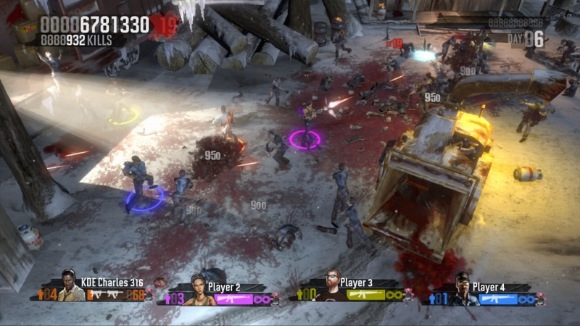 While Zombie Apocalypse won't win any awards for most thought provoking game title, it just might be a new favorite on our list of co-op games.  Published by Konami, Zombie Apocalypse pits up to four players against the zombie horde in a twin stick shooter for the Xbox Live Arcade and PlayStation Network.

The game will support four player local and online co-op through seven stages where players are charged with surviving 55 days of the zombie end of days.  There will be plenty of weapons available at players disposal including chainsaws, machine guns, and teddy bears filled with C4; but the real cream of the crop is environmental factors which Joystiq goes into more detail with.

What made this simple game so fun -- apart from the fact that its simplicity made it instantly fun -- were the arenas (for lack of a better term) themselves. We played in two: a downtown disaster zone and a junkyard. Both had multiple interactive elements (a downed airliner's jet engine, a car compactor) that we were able to toss zombie bait towards, luring dozens of the undead to their (very grizzly) comeuppance. Working together with three other players to almost "herd" the zombies into these traps was almost as fun as routing them with chainsaws (every character has one as standard equipment).

So I get to suck zombies into an jet engine and watch the carnage with four friends in co-op either online or on my couch?  Konami, you look to have a surefire winner on your hands here.