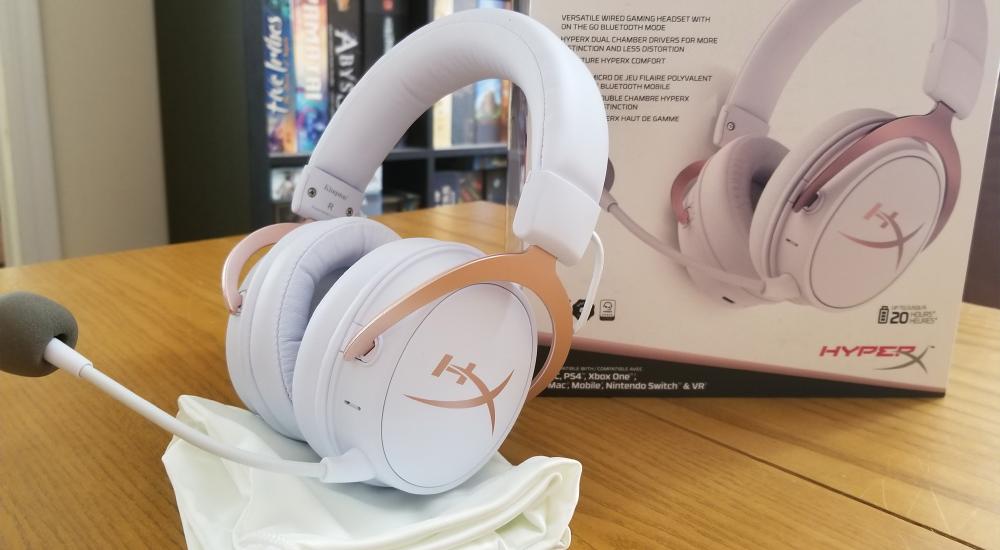 While I’m a big fan in general of HyperX’s gaming headsets, the Cloud MIX is still one of my very favorites. It is by far the most versatile headset I’ve had the opportunity to use, supporting use with a single 3.5mm jack (for mobile devices, certain computers/laptops, and consoles), dual 3.5mm jacks (for computers that support an audio/microphone jack set-up), and Bluetooth connections.

A new color version of the Cloud MIX just released this past week: the Cloud MIX Rose Gold. Functionally, the Rose Gold version is the same as the original Black version, the only difference is the color palette. All the plastic, leatherette, and cords are a bright white color with the exposed metal bits and logos displaying as a nicely contrastive rose gold. It all comes together to make a very sleek-looking set and hands-down the most stylish I’ve ever seen for a gaming headset. Even the silky carrying bag is cream-colored, and it’s much more discreet than many previous HyperX bags, since it doesn’t have the HyperX logo emblazoned on it. Everything I said about the structure and quality of the Cloud MIX (original Black color) applies to the Rose Gold version as well. It has the same dual chamber technology, dual mics (built-in mic and detachable boom mic), and 20-hour battery life in wireless mode. It’s identical in its superior level of comfort and plug-and-play readiness.

I still highly, highly recommend the MIX for hybrid PC/console/mobile gamers. Since getting a Nintendo Switch, I actually appreciate this type of hybrid flexibility even more than before. With one headset, I can connect to my phone for calls/music via Bluetooth and then switch to the single 3.5mm jack for Switch gaming when I’m out and about. When I come home, I can plug it into my PC with the dual 3.5mm jacks. And if I were to invest less than $10 in a Bluetooth dongle, I could have a wireless PC headset as well. The $199 price tag is certainly nothing to sneeze at, but it seems very fair considering this wide array of options. With mobile gaming continuing to be on the rise (certainly helped by the immense popularity of the Switch), releasing this stylish new version of the Cloud MIX makes a lot of sense. HyperX recently announced that they have sold over 10 million gaming headsets since developing their first Cloud headset in 2014. That’s a very impressive number which demonstrates they are doing something very right and that the gaming community is responding positively. If you’re a gamer who can make good use of the versatility the Cloud MIX provides, I couldn’t recommend it more - and now there are two color palettes to pick from. For a PC-focused gamer, I’d recommend the Cloud Alpha S, a USB headset that I reviewed earlier this month. This isn’t a full-fledged review, since I reviewed the Cloud MIX (Black) before, but I will confirm that the Cloud MIX Rose Gold maintains my score of 4.5/5 (check out my previous review for all the details). It’s a great headset that gets minimally docked when compared to some other (HyperX) headsets in the microphone department.