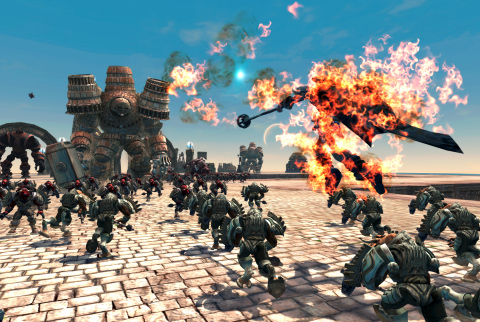 Demigod launched last month for the PC, and since that time the gaming experience hasn't been very pleasant for players.  The game was plagued with a broken street date which caused a cataclysm of problems including busted servers, and overload of pirates (the illegal kind, not the yarr kind), and a host of other issues.

But Stardock CEO Brad Wardell is being the better man, and he's not pointing fingers or making excuses.  In his latest blog post, Brad outlines just what went down and just how they are going to fix it; because one month later things still aren't running smooth.

Even though we had a pretty decent developer interview for Demigod, we haven't given the game much coverage since launch, and there's good reason.  First and foremost is the aforementioned server issues, after all, Demigod is an online game.  Second is the lack of cooperative options.  The game at it's core is a team based skirmish game, even the single player plays out like multiplayer skirmishes.  This is typically something we don't classify as true co-op, or at least, we try and not focus on.

Both these things don't mean Demigod isn't a good game, in fact of what we've played we've really enjoyed.  Thankfully it appears there is light at the end of the tunnel with a bunch of fixes coming from Gas Powered Games.  In fact, the game was patched last Friday.

Much of this is simply because Demigod is peer to peer and so it means there’s a lot of messages being sent back and forth.  A lot of our work has been in reducing the # of messages needed to connect people and writing a new network layer that was designed for P2P specifically.

PLUS, we had to write something that network gurus can tell you is pretty damn cool: Proxy sockets. So that we wouldn’t have to hand off sockets, the Impulse team was recruited onto the project and they came up with a way to not have to hand over sockets to Demigod without having to change Demigod.

Which unfortunately broke the game for a lot of folks.  So there's another patch in the works.  This one...well hopefully this one is the magic piece of the puzzle.  With all that's happened Gas Powered is going to offer players some deals and coupons for their troubles, including a 50% off coupon for another copy of Demigod.  Perfect for co-op.

Looking to the future Brad talks about some nifty new features they are looking at adding.  One in particular caught  my eye.

Q: What about modding?

A: We have discussed this issue with GPG and I can’t make promises on this but I can tell you that what we would like to allow is for people to mod AI players (LUA) and then submit them online and let them compete to see how they do. This would encourage good AI modding.  We would also like to support mod support in Demigod proper where the Pantheon would support players downloading officially “blessed” mods and be able to play them in game.  I don’t have any ETA on this yet.

This could have some interesting potential for co-op games.  Your buddy could create his AI player and upload it to you to do some test runs.  Could be a lot of fun.

We'll continue to keep an eye on Demigod to see what happens, so be sure to check back to Co-Optimus for more details in the future.