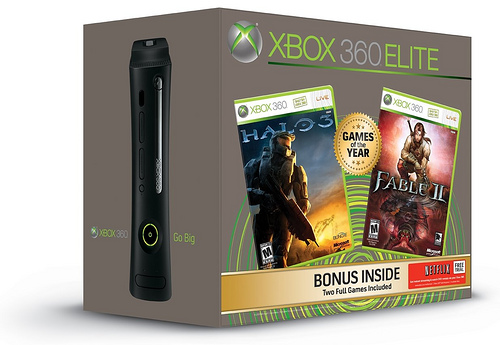 Microsoft is continuing its trend of co-op friendly hardware bundles today with a brand new Xbox 360 Elite bundle called the Game of the Year Bundle.

The bundle includes the four player co-op game Halo 3 and the two player co-op game Fable 2.  These games are included in the box at no additional charge - that's right - they're FREE.  In addition to providing two of co-op titles, the Xbox 360 Game Of The Year Bundle includes an Xbox 360 Elite Black colored console, 120 GB hard drive, a wireless controller, a wireless headset, an HDMI cable and a free Netflix trial.

The bundle should hit store shelves in the next week or two and will retail for $399.  It will be replacing the existing Lego Indy/Kung-Fu Panda bundle Elite Bundle.