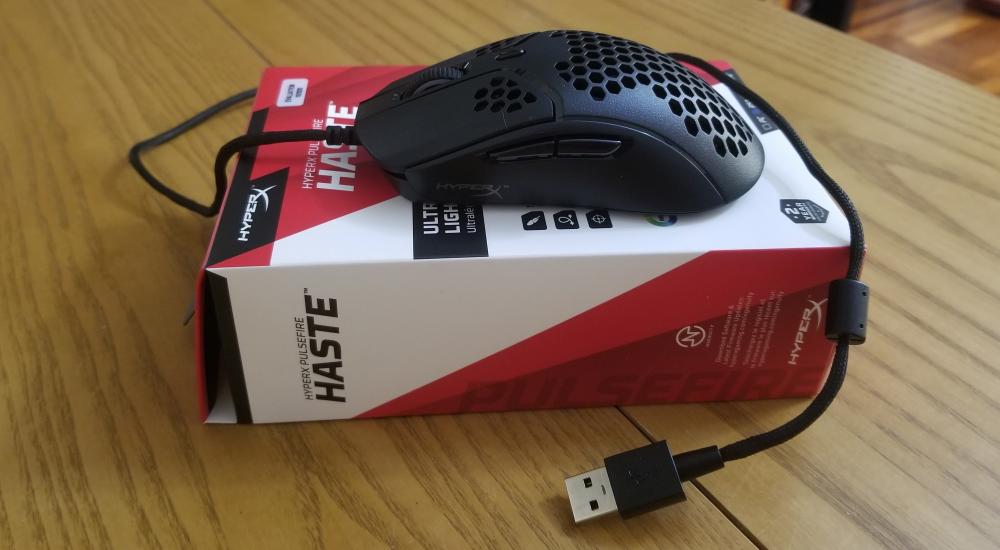 The Haste possesses six programmable buttons (the same number as the FPS Pro, Surge, and Dart, but one less than the Core and five less than the Raid) and TTC Golden micro dustproof switches. Since much of the mouse is open to the elements, it’s important than these switches have an anti-dust coating, and they’re also rated up for 60 million clicks (40M more than the Core, FPS Pro, and Raid, and 10M more than the Surge and Dart). Like most of the Pulsefire family (aside from the Core), the sensor can detect up to 16000 DPI natively.

Like the Raid and Dart before it, the Haste has a split button design where the left and right mouse click buttons are separate pieces from the body of the mouse. This provides better responsiveness to light clicks as well as a more consistent clicking experience. Like all the Pulsefire mice I’ve used, the Haste feels comfortable in hand and slides smoothly across surfaces. Unlike the other Pulsefire mice, the Haste has four small PTFE skates on the bottom corners of the mouse, as opposed to two large surface area skates at the head and foot of the base. It certainly has less friction which, accompanied by the low weight, creates an illusion of the mouse being even lighter than it is. Another difference is that the Haste comes with four replacement skates as well as grip tape (four pieces for the two main mouse buttons as sides of the body). This grip tape is light and a little springy, and is easy to remove if you decide you’d rather go without. The final major difference is the mouse cord. While other Pulsefire mice use a braided cable, the Haste possesses a “HyperFlex” cable. This cable feels extremely light and hollow inside, but seems durable.