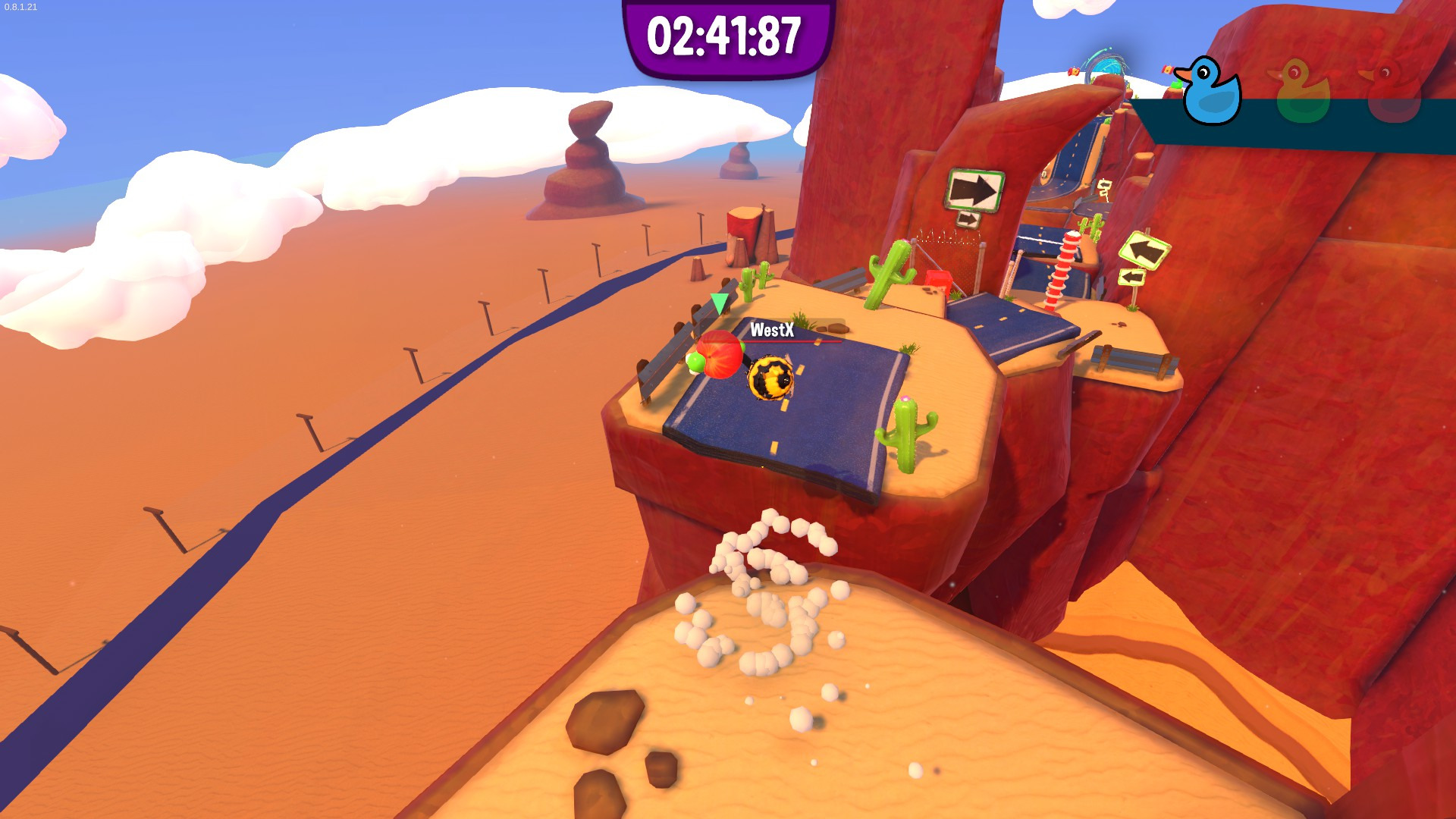 Daedalic Entertainment and developer Splitside Games call Fling to the Finish a racing game. It certainly is a racing game, but a platforming racer like Sonic R, not a kart racer. in Fling to the Finish, two local or online players control ball-like characters who are tethered by a rope and must work together to reach the end of each level, a process that ends up being riotously fun. This Steam Early Access game just got a new race type to enjoy as well as a progression system that ties everything together. Oh, and it's on sale through July 28!

Fling to the Finish offers a 2-player co-op campaign (also playable solo) as well as a competitive mode for up to four teams. The campaign currently offers four worlds, each consisting of four different maps. From every map, 3-5 game modes are available at present. Players progress through the campaign by earning ducks (medals) from playing the different game modes on a map. Earn more ducks, unlock more modes and maps. The cooperative experience somewhat resembles that of PHOGS!, only Fling to the Finish is a lot faster-paced and more intuitive. As the team progresses over each platforming-style level, both players can move around and jump independently. However, they must often take care not to let their interconnected rope get snagged around something (slowing them down) or cut (killing them and forcing a respawn). If one player falls into a bottomless pit, the other player can save him or her by grabbing onto the ground and then initiating a fling move. The team can also climb cliffs and structures by taking turns flinging each other upward. These mechanics, combined with surprisingly creative and interesting levels, make for an extremely good time with a friend.

The latest update adds a new progression system in which players earn XP from every game. Leveling up gets you one prize from the gacha machine. Unlike most gachas, though, each crank of the machine actually produces three items that players can choose from. Unlockable items include playable characters as well as banners and stickers for the player's in-game profile. Getting to choose from three prizes at a time is quite a fun system indeed. As for the new game type, it's called Ring-a-thon. In these levels, an intermittent volley of spears raining from the sky threatens to slow down the team. Meanwhile, the team can shoot for glowing rings that will propel them forward at high speed, covering lots of ground at once. The game's competitive online race mode is celebrating the new game type with the limited-time "Fling-a-thon-2022" event. From now until August 8, races feature the Ring-a-thon rules, and wins will contribute to the team's standing in a tournament. My co-op partner and I tried a competitive race and had a blast, so the tournament certainly looks promising.

Fling to the Finish costs $14.99 on Steam. The game is on sale for only six bucks through Thursday, July 28, though, so make sure to grab it while it's hot! Oh, and the game will be coming to Switch sometime in the future.