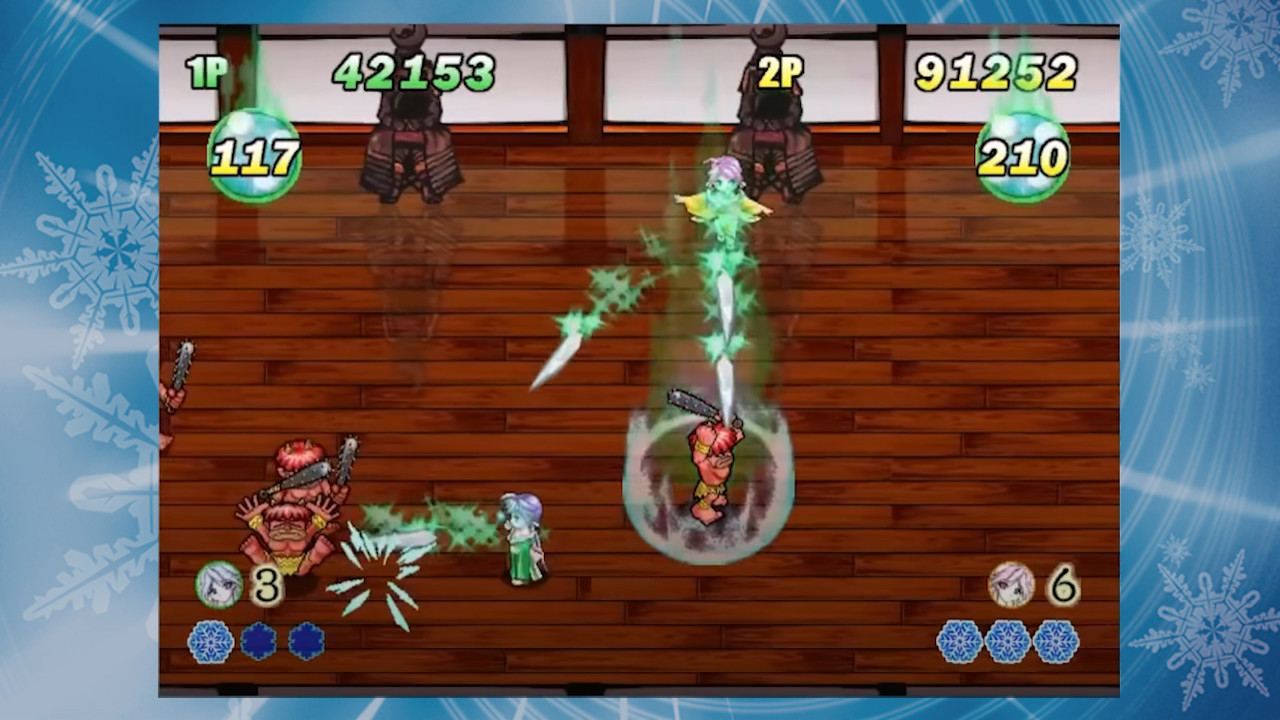 Earlier this year, Pocky & Rocky Reshrined arrived on consoles to great acclaim. We loved the game's story and artistry, but found the controls led to unnecessary challenge. Gamers might just have a similar experience when Strictly Limited Games publishes physical editions of Snow Battle Princess Sayuki on PlayStation and Switch. SBPS, which was originally intended to be a Pocky & Rocky sequel, has already been released in English on Switch, but the physical edition will be the first English release of the PlayStation version. Both versions will feature 2-player local co-op.

A quick recap: developer Starfish SD began creation of Snow Battle Princess Sayuki as a sequel to Pocky & Rocky/Kiki Kaikai back in the early 2000s. When Square Enix bought Taito (owner of the Pocky & Rocky series) in 2005, Starfish SD dropped the license and finished the game with its own original IP. The game would eventually be released as Heavenly Guardian on PlayStation 2 and Wii in 2008. In Japan, PlayStation 4 and Switch versions came along as Snow Battle Princess Sayuki. The Switch version got an English digital release in 2019, but there hasn't been an English PlayStation 4 version until now. SBPS takes place in a mystical Japanese setting. When a man loved by Saiyuki, a snow goddess, falls ill from a curse, Saiyuki sets out to find the ingredients for a cure. Joined by her sister Koyuki, Saiyuki will have to battle hordes of yokai monsters and other threats to save her love. While the two siblings work together toward a common goal, they'll also be competing to determine who is the most beautiful sister of all. The game itself is a top-down shooter featuring bright, colorful graphics and, we, predict, a high level of challenge.

Snow Battle Princess Sayuki will be released in both standard limited and special limited physical editions. The standard limited edition will get 2,500 copies for Nintendo Switch and 1,000 for PlayStation 4 at a price of $29.99. The special limited edition will be produced at 1,500 copies for Nintendo Switch and 500 for PlayStation 4 for a price of $49.99. Its contents include:

Preorders for these physical editions open at Strictly Limited Games on October 2. No word yet on whether the English PlayStation version will get a digital release, but it now seems likely. The digital Switch version sells for $15. We'll look forward to playing Snow Battle Princess Sayuki sometime in the future!