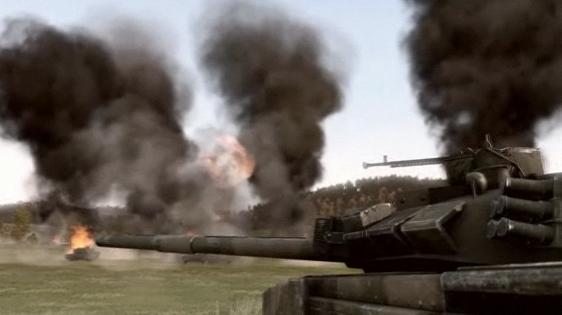 As the ArmA II website beefs up with new content -- including gameplay footage -- Operation Flashpoint: Dragon Rising has been delayed from "Summer 2009" to "Fall 2009".

Both games have been competing for two titles since last year:
1. which game is the true Operation Flashpoint sequel, and
2. which game has the most ambiguous release window.

Bohemia Interactive is using the ArmA II website to showcase not only gameplay, but beautiful renders of the landscape, some of which we've gathered in a gallery after the "Read More" link, along with the press release. Currently, the game is slated for release "in 2009". That's it.

Prague Czech Republic, May 1, 2009 - Bohemia Interactive and IDEA Games
today announce a new update to the ARMA II homepage. This time
introducing a unique opportunity to explore the world of the
post-Soviet republic of Chernarus, which is the setting of this highly
anticipated Military Simulator. The latest piece of Intel, showing us
an in-depth look at the ARMA II environment, has been declassified
this morning for immediate analysis at http://www.arma2.com

North-Eastern Chernarus is a hilly area with rocky coastlines; the
tallest hilltops reach more than 700 m above sea level, covered with
temperate forests. The environment is still relatively untouched from
logging and mining. The biggest cities and industry are concentrated
on the southern coast. There are mostly smaller villages inland,
situated in deep valleys, hidden in forested ridges or on elevated
plateaus with lush meadows.

ARMA II consists of 225 square kilometer of highly detailed sandbox
landscape, modeled with stunning detail and precision and using
real-world geographical data of the Ceske Stredohori mountains. A
picturesque area of the volcanic origin situated in the middle of the
European continent, the mountains are located in the northern part of
the Czech republic (GPS location for reference:  50°42'6.477"N,
14°7'55.217"E). Covered by 235 megapixel of open, accurate, aerial map
(15.3602 pixels), 350 km of roads, more than 50 cities and villages
and with over 1 million objects, ARMA II is a true master piece of
environment, never seen before in first person shooter or simulator
type games.

ARMA II benefits from an internal realism based vegetation system
called LINDA, capable of generating highly realistic vegetation both
for massive real-time as well as offline rendering. Linda generates
vegetation based on real biological processes including its
development during a passage of time.

The website update provides a detailed glimpse into the world of
Chernarus, including in-depth descriptions of the historical and
political situations, as well as a description of specific regions
modeled to real world geographic data, with extreme precision via
in-game images. The Intel was declassified in thematic groups every 12
hours starting this morning at 10:00 CET.