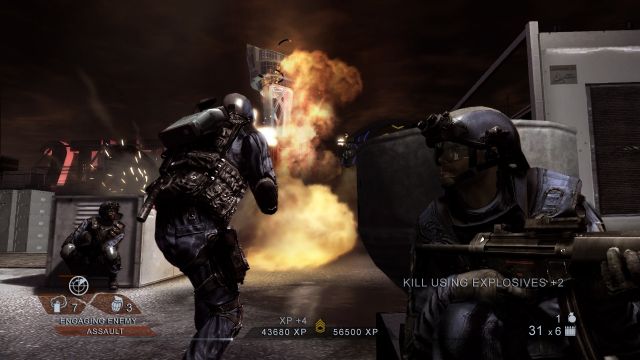 Playing games for work purposes can be a different experience than playing them for fun. This week I recount an experience I had when helping out a professional FAQ writer.

Throughout my years as a gamer I have made friends with all types of people; ranging from pals in the pub, to friends on the forum. One particular batch of buddies I have work in the UK gaming industry on various projects they cannot talk about *cough* Batman Arkham City *cough*. As readers of Co-Optimus know, the gaming industry not only covers the making of games, but also the people who write about them! One day a friend of mine asked me to partake in a different type of co-op experience; a working co-op relationship. Some might call it a collaboration, but I don’t think the name Co-Labimus has the same ring to it…

The game was Tom Clancy’s Rainbow Six Vegas 2. At the time my friend was writing game guides, which can be a long and tedious process. To spice things up he also liked to add new ways of playing the game to give the players a different gaming experience. As a regular player of Rainbow 2’s fantastic 4 player T-Hunt I had gained the reputation of knowing about the mode. Luckily, no one knew that this ‘knowledge’ consisted of me playing the game so much that I gained experience points even though I was rubbish.

It has to be said that a part of me i.e. my ego, liked the idea that I would be used in a game guide. Finally Samoza would make his mark on the international gaming community. Perhaps they would follow me through my preferred run patterns across the different maps? My choice in weaponry? Maybe some stellar tips on how 4 players can co-operate best in the game? Nope. My mate wanted me to pose.

Turns out that creating game guides consists of bandying around a few ideas, seeing what sticks and then posing. We discussed different ways in which elite players could increase the T Hunt challenge and we came up with the idea of a 2 player pistols only mode. Set the game on hard, maximum terrorists and then play with pistols – tricky. The mode is made even harder when you are constantly being asked to stand out in the open so that a photo of the game can be taken. Many images taken that day portrayed the vital few seconds before I was shot dead. Who knew that terrorists would willingly shoot a man who is obviously posing for a photo?

Perhaps you will stumble across images on the internet of Rainbow Vegas 2 – images I have yet to find. You see, I had scanned my face into the game and created perhaps the most hideous character model ever to grace online gaming. My friend assured me his guide would be released, but was I too ugly for the ‘Big Show’?

What this week in co-op taught us: creating gaming guides can be dull and Samoza is too ugly for the internet.