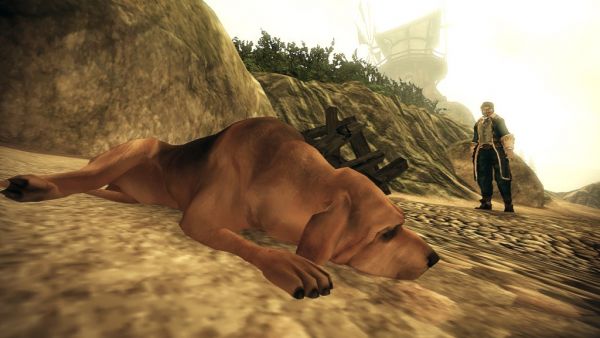 Awwwwwwwwww, look at the puppy!  Screw seeing the future in the latest Fable 2 DLC, I want to see more PUPPIES!

On a more serious note, the latest Fable 2 content is available today on Xbox Live Marketplace.  The See the Future DLC comes in two flavors for cooperative players.  The free version is required if you want to co-op with someone who has ponied up for the premium version.

See the Future offers players a glimpse at what is to come in the Fable universe, as well as new items, quests, and the ability to choose a new dog breed from a handful of selections.  The content will set you back 560

and is available now.

If you've skipped ahead to this paragraph, you'll note that I've yet to mention the "See the Future" quest. What could have been a tantalizing quest far removed from the rest of the game instead turns out be little more than a brief and barely interactive cutscene. The vision you're given is so slight and anticlimactic, you might wonder if a static screen declaring, "Fable 3: Coming Eventually!" might not have been more effective. The consolation prize (two to three hours later) comes in the form of the fun but underwhelming Colosseum, a brawling arena that can be stripped of most of its prizes within minutes.

Slightly disappointing, but for the hardcore fan it's probably worth it.  I'm still waiting for the "See the Co-Op Partner the Way he Should Be" DLC.