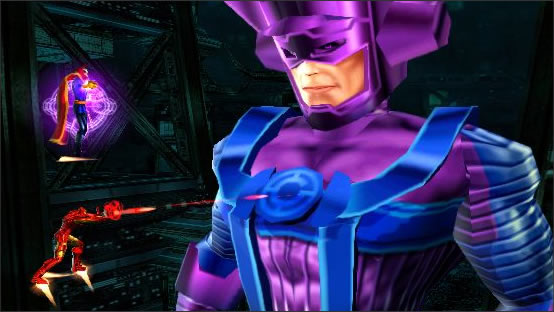 Going through stacks of games for something old to play with someone new can deliver up some awesome experiences. But, in order to mix things up in the replay department I tend to suggest a cranked-up difficulty, which was the case recently with Marvel: Ultimate Alliance. With Marvel: UA, the hard difficulty mode has to be unlocked by completing the game, and is probably not explored by many people.

To begin with, my co-op partner, Arttemis and I hit a few snags in gameplay, since running in superpowers blazing isn't necessarily a good idea on hard mode. We decided to take a step back from open battle, and focused on sticking together to defeat one target at a time. We quickly became proficient at Doom-Bot-bashing, and moved through the first few areas without many issues.

Then we have to rescue Dum Dum Dugan, and our plan fell to pieces. A distress call comes in to Stark Tower, the Superhero Alliance headquarters for the time being, disguised as a normal transmission. It's then our mission to go to the mobile "Omega base" to find out what's up. In our party at the time, Nightcrawler (as played by Arttemis), Deadpool (as played by me), Magneto for power, and Iceman for status effects. We meet up with Dum Dum Dugan, and thus begins our troubles.

Escort missions tend to be frustrating when it's your duty to keep someone alive, and their death equals instant failure for you and company. Now, when your escort lives up to the name "Dum Dum" by running head first into battle only to be quickly decommissioned, the frustration is overwhelming. We first tried our aforementioned award winning tactic, running in to kill one enemy at a time, but somehow Dum Dum Dugan was always on the front line asking to be maimed.