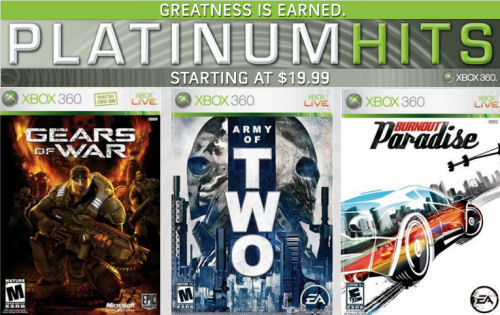 Microsoft has announced a fresh batch of their platinum hits titles with very wallet friendly pricing.  Most titles will set you back $19.99, while a few still hover around the $29.99 mark.  There's also some fancy smancy new packaging available for these titles, so it's easy to distinguish between the normal priced titles and these.

The latest set of games has three solid co-op titles:  Gears of War, Army of Two, and Burnout Paradise.

What else can you snag for cheap?  Forza 2, Mass Effect, Viva Pinata, Battlefield Bad Company, and Fight Night Round 3.  The entire Platinum Hits collection contains over 45 Titles, so there's plenty of good cheap games to be found.