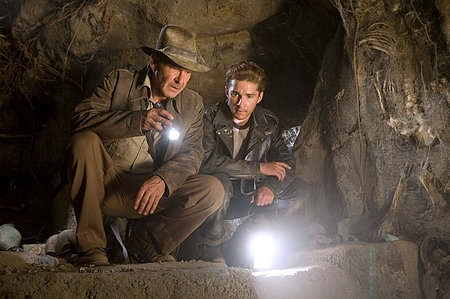 GameInformer has a soft spot for Indiana Jones, apparently. Well, really, though - who doesn't? The communist-slugging professor with a knack for nearly getting killed on motorcycles possesses a charm that seldom fiction heroes have anymore.

For me, Indiana Jones and the Kingdom of the Crystal Skull was probably one of the biggest movie let-downs of all time. Not too long after that, the rumored Staff of Kings Xbox 360 game was canceled and in its place was a severely lackluster cash-in. At least the portable version was bearable. But the fanboy in me is a glutton for punishment, and when GameInformer put the words "Indy" and "co-op" in the same post together today...I was all ears. (My mother's ears, that is. The rest belongs to...never mind.)

Looking perhaps a little too far into some Indiana Jones 5 movie rumors, blogger Jeff Marchiafava poses an interesting speculation: with Indy's son Mutt purported to return for the next film installment, might we see some more co-op games that tie in?

According to the script rumors Indy 5 will have somewhat of an ensemble feel, similar to Kingdom of the Crystal Skull. What this means for gamers is the possibility of playing as a supporting character that isn't a total drag. Most of the original trilogy's characters didn't lend themselves very well to action-oriented gameplay; the cast of the fourth and potential fifth films are more likely to fit the bill, though. The most prominent is Mutt, of course, which gives this speculation more momentum than, say...Marcus Brody...would. So, what bankable information do we have? For one thing, Traveler's Tales is sure to have a cutesy little LEGO Indiana Jones tie-in if the movie rumor turns out to be true - and by their track record, you can expect co-op. Then there's the game assets from the Xbox 360 build of Staff of Kings, which was used as a tech demo  for NaturalMotion's Euphoria engine (predating Star Wars: The Force Unleashed and Grand Theft Auto IV). Finally, the most important and most credible piece of the puzzle: the amount of hype that the Indy tech demo generated, and the likely stampede that an official game - with co-op - would cause.

What about you? Would you be excited for some more co-op Indiana Jones punching, shooting, and hat-to-head stapling?