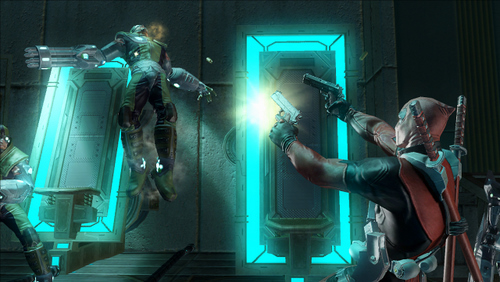 As the summer rumor mills start to turn, we pick up a few interesting tidbits about games we are looking forward to in the fall. Marvel: Ultimate Alliance 2 has been especially full of rumors, since only about half of the playable characters have been revealed so far.

Deadpool has become a fan favorite in most everything he's involved in, and it's nice to see how he actually looks now that he's officially joined the lineup. That's right, we have a nice video showing off Deadpools sweet moves, and an inside look at what it takes to bring a sarcastic mercenary to the Ultimate Alliance.

The developers put a lot of extra effort into explaining how Deadpool works in the overall scheme of things, including individual accounts of how the project was approached. Much like the Weapon X program, a lot of hard work went into this one and a lot of crazy awesome things came out.

"When putting together a new character, it’s always good to be mindful of the visual capabilities of the heroes we’re designing. We don’t make The Hulk shoot laser beams, we don’t animate Storm with weapons. Deadpool’s visuals are universally over-the-top; in a way, he’s like a clown who pulls out different props to get a laugh. Except in his case, he’s laying waste to everyone in his path."

How well does the Merc With The Mouth play with others? Well, it looks like he's got quite a few co-op tricks up his sleeve, and some grenades too!

"Deadpool was one of my favorite Marvel characters, so I wanted to spend extra attention on his Fusions. He has lots of choices when contributing to a Fusion move: He has swords, guns, grenades and even the ability to teleport! We use each of these elements at different times. In one fusion move, he charges with his fusion partner, slicing anything that comes in his way. In another he jumps into the air shooting a barrage of bullets knocking enemies out of the air."

To spread some delicious icing on this cake, the developers had fun with a glitch that plays well with Deadpools general insanity. It looks like this glitch will even stick around for the actual release, since you never need an excuse for why Deadpool does what he does.

"There was a Deadpool specific bug that came back to haunt us time and time again, but everyone agreed it seemed to fit Deadpool’s hilariously random and unexpected personality. Basically, using Deadpool’s "Bullet Barrage" move, players were able to attack their own teammates. Though annoying at times, this was definitely good for a laugh the first few times it occurred."

I look forward to seeing what else they throw in with this incarnation of Deadpool. Perhaps a way to translate those little yellow boxes into game dialog? Check out what else the developers have to say, and enjoy the video we promised - laced with explosions, and co-op fusion!