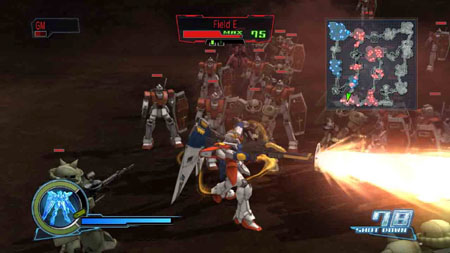 I have to be quite honest with you: I have a serious weakness for giant robots.  Shogun Warriors, Voltron, and best of all, the Transformers had a profound effect on me as a kid.  This same awe and passion for enormous mechanical automatons has been passed on to my kids.  So, when we saw Dynasty Warriors Gundam playing on a kiosk, it was only a matter of time before we tried it out.  Co-op meets giant robots?  What could be better, right?

Let me make it clear: I know that technically, the Gundam Mobile Suits aren't really robots.  They're close enough, though, and all sorts of cool.  Energy blades, rocket launchers, guns, and flight capability are all very impressive.  These abilities translate fairly well into video game terms.  Your ridiculously overpowered robot wades through wave after wave of lesser foes, as should be familiar to fans of previous Dynasty Warriors games.  The actual combat aspects are fairly simple, and reminiscent of the button mashing brawlers of yore.

Impressive and satisfying as the ruthless mowing down of enemies is, it would get tiresome quickly without a more strategic element.  That element is thankfully present in Dynasty Warriors Gundam.  Each level is represented by a map divided into color coded grids.  Areas you control are blue, while those controlled by enemies are red.  Once you enter a red zone, and clear it of enemies, reinforcements arrive and hold the fort for you, allowing you to clear the next grid.  Simple, yet quite compelling, its a bit like chess, and often you're barely able to keep a lid on things.  Good thing you have a partner to help!  In our experience, a single player is easily able to clear and hold an area, so splitting up (via split screen) often makes sense. Defeating boss characters will definitely take some teamwork, though.  As you play through the first character's set of missions, the antagonist is a pilot named Char, and every other map or so, you'll face him.  We found he was just a bit too tough to solo, but far easier when you and your wingman could beat him up simultaneously.  When you and your partner both activate your charge up abilities at the same time, you can dish out some serious damage.  This is quite helpful clearing out the hordes of enemies surrounding bosses and is not too shabby against the tougher mechs one on one.

There's a fair bit of customization and several different missions, some based on the Gundam anime, and others unique to this game.  Really, though, Dynasty Warriors Gundam is a simple game, with just enough challenge to make it interesting.  The fact is, giant robots are awesome, and beating up other not-so-awesome giant robots, with another awesome giant robot as your partner, is pretty much... you guessed it: awesome.