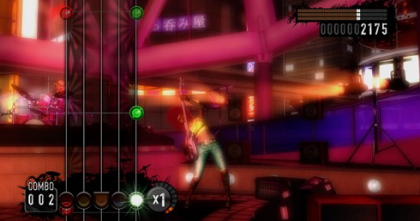 Beat World Tour with a few friends in Rock Band?  Shredded faces with a buddy in Guitar Hero 3?  Lost pounds of water by sweating too much when you challenge your friends is Dance Dance Revolution?  If you have, you likely already have a huge number of peripherals around the house.  In addition to being in the way, those suckers are really expensive.  But hey, at least it's a one time investment right?

Unfortunately, that won't seem to be the case for much longer.  Recent details have come to light about the next batch of rhythm games coming later this year.  Be prepared to take out a second mortgage and add on a storage room if you want to play all of them.

First up is the long rumored news that Guitar Hero 4 will include a drum set and microphone.  In an obvious "if you can't beat em, join em" move, scans from the latest Game Informer show Activision's prototype drum kit for GH4.  The kit has 3 drums, 2 cymbals, and a bass pedal, giving it one more input and promising to be incompatible with the Rock Band drums.  And here you thought the whole PS3 GH3 controller business was messy.

Hot on the heels of this disappointing news is an announcement from Konami, of DDR fame.  'Rock Revolution' will launch in the fall and promises to bring "the definitive drum experience" with the "most realistic drum peripheral on the market".  Of course, guitar and bass will be included too, though the press release mentions no vocals at all.  That's puzzling given Konami's success with Karaoke Revolution.

As a huge rhythm game fan, we love the idea of more and more games being available.  However, given that, in our household alone, we have purchased 2 PS2 guitars, 2 360 guitars, the Rock Band set, Donkey Konga bongos, and 3 DDR mats, in addition to the games themselves, as well, sometimes enough is enough.  Does anyone think having two more drum sets laying around will be a good thing?  The best scenario might be if the Konami drum set will work with both the GH and RB games, but that seems unlikely at best.  We'll know more later this fall as more information is revealed.