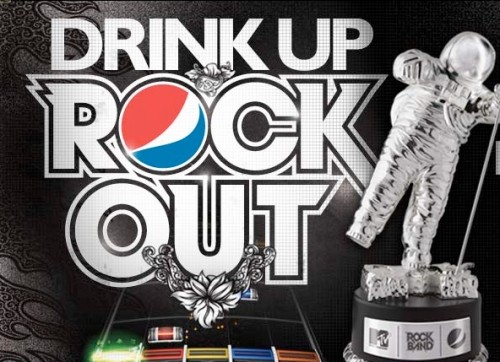 MTV Games and Pepsi are teaming up for big summer promotion for Rock Band.   Beginning June 2, Rock Band fans will have the opportunity to become winners of an MTV Video Music Award.  All you have to do to take home your own prestigious Moonman trophy is shoot a music video of you and your friends playing Rock Band in co-op!  There is a catch however, you'll need to be playing along with one of the contest's predetermined songs. Videos can then be submitted to the contest website, where users will vote on which band totally melts faces and will be walking the red carpet at the 2009 MTV Video Music Awards.

If you upload your video by 6PM on the first day, you could even be entered to win a trip to E3 which begins the next day!

So where does the glorious nectar of Pepsi fit into all of this?  Specially marked bottles of Pepsi will feature codes underneath their caps throughout the summer.  These codes can be entered on the contest website for a chance at thousands of Rock Band song downloads, Rock Band 2 bundles, Xbox 360 consoles, or a trip to a Harrah's Entertainment location.  It doesn't look like the PS3 or Wii get any love in this contest.

My suggestion to win?  Dress up like the folks from another great co-op game, Left 4 Dead, and rock their zombie socks off.

Thanks Kielaran for the tip!