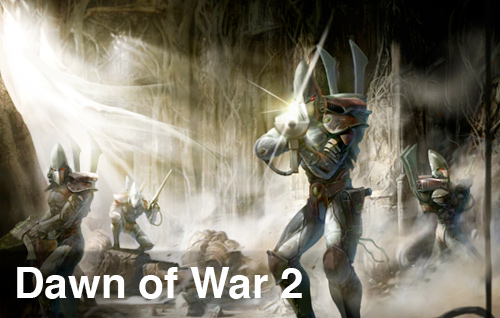 In what was a truly fortuitous circumstance, the focus of the latest This Week in Co-Op, Relic’s Action/RTS title Dawn of War II, coincided with the latest GFW Live Co-Op Night.  Fellow Co-Optimus staff member Mike “pheriannath” Katsufrakis and I decided to get some practice in before things got kicked off, as it had been a while since either of us had played the game.  We also have a history with the Warhammer 40k tabletop game and a particular friend that preferred finding, and using, the cheapest strategy possible in that and every other game we played with him.  In this case, he liked to use the Tyranids so Mike and I have just a little built up anger towards the ravening, biological horde.  The stage, then, for our co-op adventure was set: the Tyranids are invading, the planet Typhon is crying out for help, and we want to kill as many as possible.  Blood Ravens… are… GOOOOOOOOOOOOOOO!

A reference to a DS rhythm game from a couple years ago may not bring to mind the most epic of space battles, but we just couldn’t help ourselves.  Once Mike and I had cleared the first few levels and gotten to the main portion of the game, we had our groove set and we were tackling problems all over that little corner of the galaxy.  With some new issue popping up every few minutes, you have to start wondering if Blood Ravens get called in to rescue cats stuck in trees or help a washed-up basketball player battle a fire-breathing golem (ok, so the latter is feasible). Anyways, Mike assumed control of the Force Commander and Thaddeus’ Assault Marines squad, the melee group, and I was responsible for Avitus’ Devastators and Tarkus’ Tactical Marine squad, the ranged group.  This was a rather natural fit for us as I tend to prefer picking targets off from a distance and Mike… well, Mike really likes “death from above.”  Unfortunately, this same dynamic led to our first problem of the night: who gets to kill the group of enemies first.  In my defense, my marines had frag grenades and it’s the natural order of things to throw one dead smack into the midst of a group of Orks, Eldars, or filthy, cheating Petes… err, Tyranids.  Mike holds that that same “natural order” guides his use of the Assault Marines’ “jump” ability so, sure enough, Mike’s marines land in the middle of a group of enemies just in time to get blown up by me grenade.  We both got the satisfaction of blowing a group of people apart, at least, but it was clear that the natural order needed some refinement.  Eventually, we worked out a system where Mike claimed the first wave of enemies, and I would move up to hit the second wave with a grenade, provided they weren’t too close to Mike’s squads.

Our second problem, and first challenge, actually came from the one race we thought we’d pretty much march right over, the Eldar.  Relic has done a fantastic job of keeping to the spirit of the Warhammer 40k tabletop game; from the units, to the upgrades available to units, to the benefits of cover, Dawn of War II keeps as many of the elements of the tabletop game intact without destroying a competent RTS.  Mike’s and my previous experiences with the tabletop game and knowledge of the different races’ strengths and weaknesses, however, did little to prepare us for an Eldar Fire Prism tank and some artillery platforms.  We knew that they packed a bit more firepower than the other enemy units we had taken down, but we were blown back (literally) by the damage they caused. Three units came close to wiping us out.  Fortunately, there was a reinforcement point nearby so we were able to bid a hasty retreat and shore up our units before attempting to tackle the Eldars’ “big guns” again.  Oddly, the same failed strategy of the both of us jumping/grenading an enemy that caused us trouble earlier was the exact strategy that lead to our victory.  We were able employ an effective one-two punch with Mike jumping in, knocking the tank and platforms around some, and then running out right before my grenade landed and finished them off. By the time we cleared that level, and the one immediately after it, it was well into the GFW Live Co-Op Night.  It’s amazing how quickly time flies by in that game as each level is pretty well paced to be about 15 to 20 minutes in length; and with the possibility of earning multiple deployments for one day in the game, a whole hour has gone by since you started.  While Mike and I started out the evening looking to hone up on skills and kill a few Tyranids for old time’s sake, we quickly lost ourselves in the battle to save the Blood Ravens’ worlds, and found that our greatest enemy was the one we least expected.  While I can’t speak for Mike, I will say that if you’re ever at the far reaches of space attempting to save three planets from destruction and are looking for a partner, let me know.  I’d welcome the opportunity to kill a few more Tyranid, or some of those smug, pointy-eared Eldar…