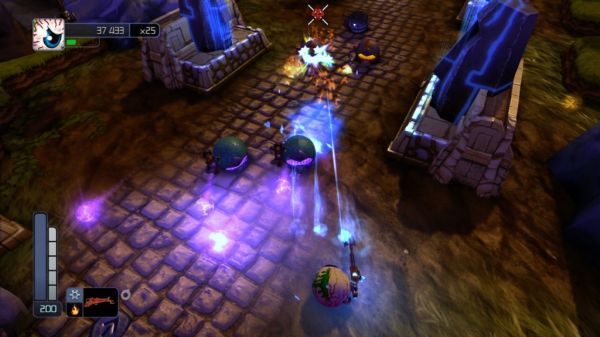 Indie developer Playbrains is set to debut their first console title via the Xbox Live Arcade, and they're bringing the 80's to co-op arcade shooters! MadBalls in Babo Invasion will hit the Marketplace sometime this summer.

We brought you the breaking news and trailer back in November, but now we have the obligatory pre-E3 press release, chock full of interesting game modes and features. The press release is so cheesy, you'd have thought our own Nick Puleo wrote it*, but alas, there is another campy writer out there with the nerve to add undue flair to an otherwise already-too-awesome game concept...

Check out the trailer and gallery below -- I dare anyone to say that this does not conjure some fond memories.

A PC version is expected to follow/coincide with the XBLA release, but we have not specific date on either version yet.

*Speak of the devil! Managing editor Nick Puleo throws in his two cents:

We announced the four player co-op Madballs: Babo Invasion back in November of last year.  Our nostalgia glands went into over drive at the prospect of playing as this classic 80's toy franchise.  Today we can bring you some details about the game including a summer release date, screenshots and a new trailer.  Sadly this seems to only apply to the Xbox Live Arcade version, as there's no update on the PC version of the game.


First up, the game features two to four player online co-op through the campaign as well as an enduro mode which we can only assume is a Horde style mode.  We really seem to be saying that a lot lately don't we?  There are ten character classes, each with two unique abilities.  The campaign contains 10 levels littered with over 50 secret unlocks.

Playbrains, an independent game development studio specializing in the digital download arena, are proud to announce that their debut console title, Madballs in Babo Invasion, will be releasing on Xbox LIVE(R) Arcade in Summer of 2009.

A gameplay rich, feature laden 'casually hardcore' action shooter, Madballs in Babo: Invasion (MiBI) is that rarest of gaming commodities; a genuinely unique title. Featuring the recently re-released Madballs (tm) characters, Oculus Orbus(tm) and Horn Head(tm), from the popular 1980's toys best remembered for their outrageously bad looks and graphically colorful names. MiBI is an arena based 3D shooter where players are able to design their own combat maps almost instantaneously by placing a combination of map tiles to create a never before seen map before gameplay starts. Truly, no two games are ever the same. And with up to 16 player Multiplayer support, MiBI will boast the highest number of players over Xbox LIVE Arcade upon its release.

Offering players a satisfying and immersive experience in both single-player and multiplayer, Madballs in Babo:Invasion has a plethora of features and game modes such as 4 player online co-op along with, never-before-seen in an Xbox LIVE Arcade title, being able to incorporate your Xbox LIVE Avatar into multiplayer combat via the 'Avatar Attack' mode. Yes, Xbox LIVE Arcade combat just got personal.

Much more on this groundbreaking game will be revealed in greater depth leading up to its release in the Summer of 2009, including additional information on the following features;

·'Invasion' Mode - the signature mode of the game, players take turns placing map tiles to create a unique multiplayer map prior to each match

·Classes - 10 character classes (each with 2 special abilities) over two warring factions, with each faction having 5 unique weapons each with two distinct firing modes

·Action - emphasis on fast-paced, visceral action that is easy to pick and play, yet offers a real strategic challenge for hardcore gamers