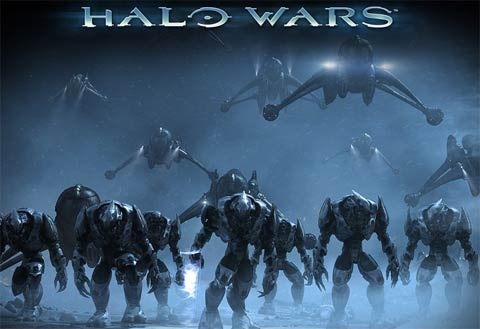 With the release of Halo Wars DLC "Strategic Options," we decided to give it a test drive in the name of Co-op. These three new modes are available through the skirmish menu, and add a certain flare to simple seek-and-destroy gameplay. Nick "BApenguin" and I tried out each one of these, and wanted to share that experience. Capture the flag which has a sentinel flag carrier that spawns in random locations, that has to be destroyed to "capture the flag". The unit that has captured that flag has to hold on to it for 2 minutes to score. If that flag bearer is destroyed, no point is awarded to either side, and the sentinel flag bearer and timer is reset. Oh, and did we mention you can't hide with the flag? The flag will put a spotlight on whichever unit is carrying it, so it can be targeted at all times. Keep it protected for the full two minutes to win!

Tug-of-war - this mode was a little less straight forward. I have looked up the details of this game, and basically every website says the same thing; keep the cursor on the sliding bar in your favor. There is a frowning face, and a smiley face on either end of the sliding bar, and whichever side gets the cursor all the way up to their smiley face, they win. We didn't exactly figure out what contributes to that sliding bar score; units produced, supplies mined, or buildings/fortresses owned - maybe all three. It's the most like the original skirmish mode. Reinforcements - this mode was very different. After a set amount of time, you are granted a certain number of units based on the amount of supplies you have. There are several "waves" at different intervals that drop units. You'll get many more of the more powerful units as you get more supplies - the catch? you can't build your own units. You have to survive enemy waves as they get more units, and you have to be able to go squash them eventually as well. A refreshing challenge to the skirmish mode.

Of these three, the Capture the Flag mode was our co-op favorite for a number of reasons. This mode forces players to balance strong defenses, as well as fast offenses. The fast offense to capture the flag in the first place, and a steady defense to defend that flag until points can be scored. From a co-op standpoint, it was nice to trade off these roles with another person, so one would focus on defense, and the other on offense.

The most challenging mode is the Reinforcements, balancing a challenge between resources and units, attack and defense. The co-op here works relatively well with communication. Since all of the groups get unit drops at different timed intervals, you'll have to cover one another while your buddy is waiting for their units. Also deciding when to attack together, since going in single handed isn't really the best idea.

As for the Tug of War mode, it's almost the same as any other skirmish except for the win conditions. Once that sliding cursor moves to your teams "smiley face" side of the bar, it's over. Co-op had the sliding bar take both allies into consideration, as we both had the same numbers on the bar, and we won simultaneously. Otherwise, if anyone has any details on this mode to share, please do! We'd love to learn how to make co-op work to our advantage on this one!

The Halo Wars universe continues to impress us from a co-op standpoint, and right now we're just hoping to see more added on to this title to keep it alive and well - or perhaps to feed our twisted little addiction. Additional maps, playable Flood might be nice, or a Covenant Campaign perhaps?