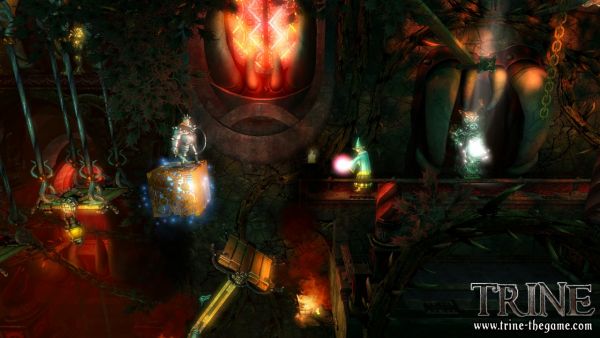 Though it's been warned that one shouldn't judge a book by its cover, we couldn't help it with Trine. Luckily, those warnings that fell on deaf ears didn't apply anyway, because after some demonstrations at E3, it's been said the game is at least as fun as it looks. This is great news for gamers, because they game looks phenomenal. 1up got their hands on this baby for an in-depth crash course, and share some intimate details with us.

"The real blast, has to be the game's co-op multiplayer. Communication between players is essential, and you hear a lot of, "Put a box over here," "You need to swing on that," and, "Oh god, more skeletons!" However, you won't see three wizards running around, only one of each character is allowed on the battlefield at a time. It ups the strategy quite a bit, though it gives kind of an advantage to two players (instead of three). Two players can take turns using the thief to get up to some of the harder to reach places, or the wizard can act as an air-lift for the knight."

You may be wondering what Trine is exactly, because let's face it, we've been blinded by its beauty before taking into consideration the brains of the project. Trine will put hero characters of 3 different yet balanced classes against obstacles in a platforming environment, each of them with abilities necessary to continue through a stage. Platforming fantasy style co-op gameplay? Yes, please.

What did 1up's Scott Sharkey think of the experience presented at E3?

"The single level shown left me wanting a lot more. Trine presented some clever puzzles with multiple solutions depending on the number of players, like one that required making a box and using it to levitate the knight up to where he could cut the rope on a boulder so that it could smash a way through the floor. The next time through, I realized I could accomplish the same thing by swinging up as the thief and switching characters on the fly. With the promise of more of that kind of thing, hell yes, I'll be downloading the game this fall."

So, a wizard, a knight, and an archer walk into a bar...and we're sold. Beautiful visuals, and phenomenal gameplay to boot? Who says the personality doesn't count for anything? Keep an eye out for Trine on the Playstation Network, and PC this fall!