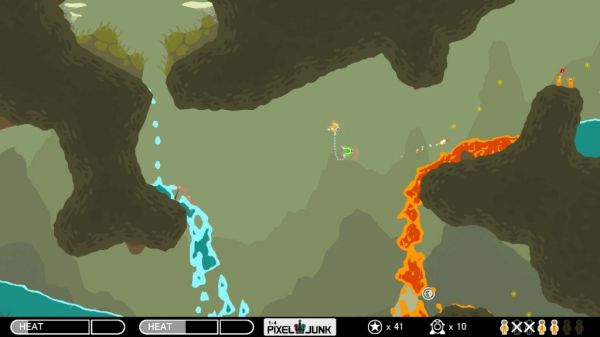 The above screenshot doesn't do Pixel Junk Shooter any justice, but the below video I'd say gives you a better idea of just how beautiful the game is.  The latest in the Pixel Junk series from Q Games, Shooter tasks players with exploring underground caverns filled with lava, water, and dangerous enemies.

The game is going to support two players in co-op when it ships this fall.  The co-op mode is detailed over at the PlayStation Blog, and it sounds like it's going to be a ton of fun.

We’ve tried to make co-op as de-stressed as possible, so even if your player’s ship gets hit by something or overheats and starts crashing towards the ground, you can pop out your extendible hook thing (no official name for this yet - “Grabber” perhaps?) and grab your friend (he’s a bit heavy tho, so watch out), then you can carry him to the nearest pool of water and dunk him in to restore his health. If you don’t manage to grab him in time, he’ll just re-spawn near you and you’ll be docked a life.

That sounds pretty sweet, it's like those crane games at the carnival, except instead of winning a prize you are saving your friends life!

The team promises plenty of strategy stemming from the game's fluid dynamics, with replayability and puzzles galore.  But that doesn't mean they left shooter fans behind - big boss battles are also planned for the final game.