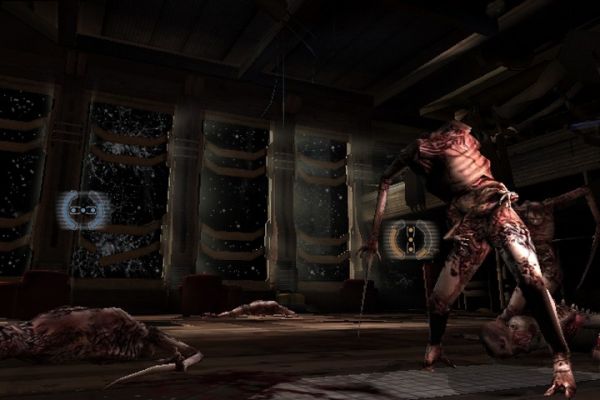 An instant fan favorite, the Dead Space video game brand has made appearances in comic books, movies, and finally a second game. This game is not anything like the original, while keeping the true to the original idea. Dead Space: Extraction is an on-rails shooter title exclusive to the Wii with our favorite feature, Co-op. We've seen a bit on this game, getting closer to release we're finally hearing some hands on experiences with it which we would love to share!

First and foremost, Dead Space: Extraction is not the Wii port of the first game. This takes place before is before Isaac Clark reaches the Ishimura in the Dead Space timeline, and puts players in the shoes of either detective Nathan McNeil, or security office Gabe Weller. The storyline is the evacuation from the planet containing the infection to the "safety of space", showing familiar moments from the comics and movie.

As an on-rails shooter, Dead Space: Extraction made sure to keep things interesting. Instead of following one set path, players are given options at several points in the game. The different routes will produce different unlocked modes, and different outcomes to the levels played. A refreshing approach to on-rails shooting games, and co-op as well! The drop-in drop-out co-op will cause the game to adjust its difficulty accordingly. Adding a challenge to the co-op gameplay, while at the same time not overwhelming a single player should their co-op partner have to leave.

The Wii will also adjust puzzles to suit two players, somehow giving each player a specific task in the puzzle solving process. For instance, if one player is solving the puzzle, the other will have to fend off the horde. Co-op hard at work is what we like to see. Were these features not enough? According to Artesthnica:

"The various weapons work differently, too. As always, the Line Gun and its proximity mines proved an immensely satisfying way to dismember the Necromorphs, while the flamethrower and Arc Welder proved better at handling multiple opponents at once. The latter is a new weapon for the series, and it utilizes lightning-like attacks to take out enemies."

After months with tidbits of information, it seems like this game is really coming together nicely! We can't wait to try out the co-op to see just how well the Necromorphs fare against two of us!