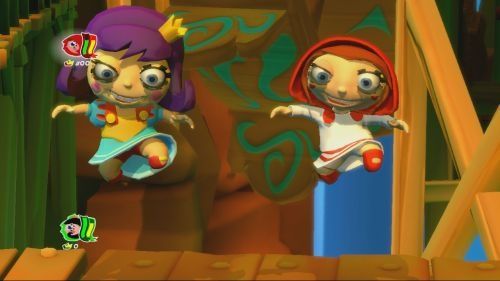 What do you remember most about the fairytale stories from your childhood? If you were exposed to Mother Gooses version of many of these tales, your memories are probably full of talking animals, bright colors, bizarre characters, and happy endings. Not too far off is Fairytale Fights, with it's bright colors, bizarre characters and, well, the similarities end there. Prepare to face a beautiful world with environmental hazards and relentless enemies in Fairytale Fights, with a taste of twisted humor we can't ever seem to get enough of.

You're Red Riding Hood, or some other Fairytale character, and you've lost your spotlight in the Fairytale world. Now, it's time to win that spotlight back as brutally as possible in this hack-and-slash adventure - we're thinking Castle Crashers meets Grimms Fairytales. Wield axes, magic wands, knives, guns, and many other weapons to take back your rightful title in this world made of books and not-so-friendly creatures. Insanity seems to play a solid role in the characters for Fairytale Fights, as Red Riding Hood, menacingly wide-eyed, takes to tearing apart anything that stands in her way. Any Big Bad Wolves out there better be ready.

Of course, being visually bright makes the gore in this game stand out in a twisted cartoon fashion. After dispatching an enemy, characters that step in the pool of blood will slip-and-slide around, and leave a trail of bloody footprints as they walk away. To add depth to that gore, if an enemy is sliced up in some way or another, their body exposes the many "layers" in the game. The developers called this "Salami Violence", where slicing an enemy across the torso reveals ribs in cross section, and a head dice will reveal a brain. Not exactly a game one should buy for their children, or to relive their own childhood, Fairytale Fights gives all new definition to the term "messed up."

To summarize, we have beautifully serene levels built straight out of individual fairytale stories using books as building blocks, with a boatload of environmental and malicious gore for those of us that blame Disney for their relationship troubles. You'll be able to play as one of many fairytale heroes along side up to 4 buddies co-op. Fairytale Fights is set to be released this winter as a full game on Xbox 360, PS3, and PC with planned DLC for those of us that need more once we've sunk our teeth in, you'd better arm yourself properly.

Thanks to Tino for the Tip!