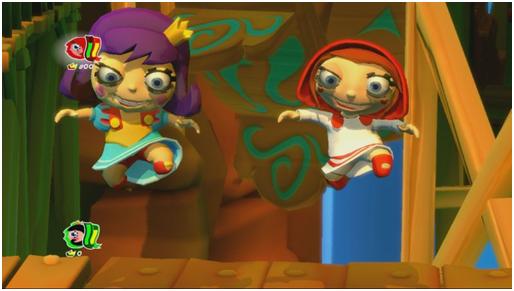 I like to consider myself a Master of Bargains.  This is no proud boast, but the label given to someone who spends far too much time hunting around in bargain bins.  I am Samoza, and I am a bargain addict.  I love the thrill of finding a cheap game and taking it home.  Many times these games have been dismissed by the critics, but at £10/$17 who can argue?  With co-op in mind, I have found myself buying two copies of the same game so that I can inflict one on a friend.  The likes of Tom Clancy’s HAWX and Tenchu Z have been bought in duplicate for under £20; both of these were nice co-op titles.  Could my latest purchase keep up the standard for my cheapo buys?  Co-Optimus warned me that Fairytale Fights had its problems – was I right to dismiss them?

I have often found that most games are better played in co-op.  Even something as repetitive and dull as the wobbly flesh men in Kingdom under Fire: Circle of Doom, are made amusing by having a pal or three along.  “What’s that?”  You cry in anguish.  “A wobbly fleshman,” is the obvious reply.  With this in mind, any game that is playable in co-op has some merit, even if it is a backdrop for you and some friends to have a chat.  As a man I refuse to speak on the telephone, but over LIVE, its just plain politeness.  Therefore, for a fun co-op experience all I need is a co-op pal and a decent server.

After an hour or so of repetitive hack and slash action my friend and I had completed Act 1 of Fairytale Fights and were enjoying it enough.  This is no game of genius, the curious mix of cute fairytale characters and ultra violence just does not work.  The child audience are prevented from playing the game due to the levels of gore, whilst a lot of hardcore gamers will be unsure of the cute graphics.  It is for this reason, and the fact that the controls suck, that the game was already in the reject bin.  However, this was no real problem for a man who has completed Too Human.  I am used to completing below average games and they have not stopped me yet.  What almost did stop me was the poor programming.

Tenchu Z is possibly the worst co-op game I have played online in terms of ropey servers.  More than once my character became stuck in the wall or jerked around the screen with all the agile grace of a constipated elephant.  However, is a game too bad when you can trade it in for more than you paid for, like I did for Tenchu Z?  Another game that springs to mind is the first Army of Two.  EA’s famous servers made my pal and I the least effective mercenaries since the time someone who was in trouble phoned up the B Team by mistake.  At times the sniper sections proved unplayable.  All these issues pale in comparison to Fairytale Fights.