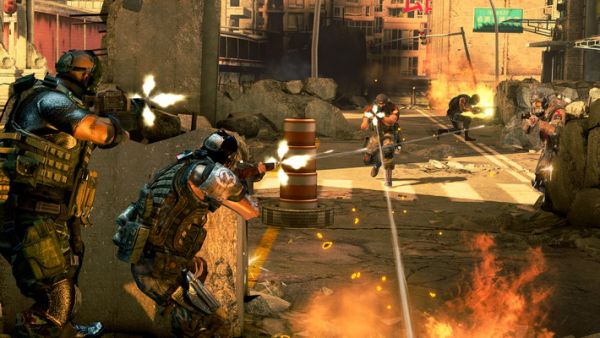 See this screenshot? This is the result of a gaffe and an over-defensive attitude on my part this week. The flames, the deadly gunfire, the implicated noise and chaos...human drama at its best.

Army of Two: The 40th Day looks like it will take advantage of our favorite hissy fits, but with a twist: instead of letting co-op partners argue over what gun to take, who gets the health and power-ups, etc...moral decisions are now decide by whoever pushes the proper response first.

It sounds like a cop-out on the developers' part, I know, but consider the complexity of a co-op game that gives the players this much freedom -- whereas a voting system (a la Left 4 Dead's cutscene skipping) takes the safe road until everyone agrees, now it's up to each player to decide whether to pull the trigger or preserve their in-game integrity.

Stephen Totilo had a chance to view the same demo that Joystiq saw earlier, but he was able to describe the demo in more detail:

The moral choice presented wasn't the most interesting one I'd ever seen in a game, but the manner in which it was presented was fascinating. The players weren't asked to vote. They weren't told that only one of them could make the decision. Either player could make the choice using their own controller, and that would be the choice for both of them. The first button press on either controller was the only decision they'd get to make. They'd have to live with it, whether they'd talked it through or if one of them had just mashed the A button first.

Who would you trust to play a game like this with?

It's going to be neat to see what situations call for these moral decisions.