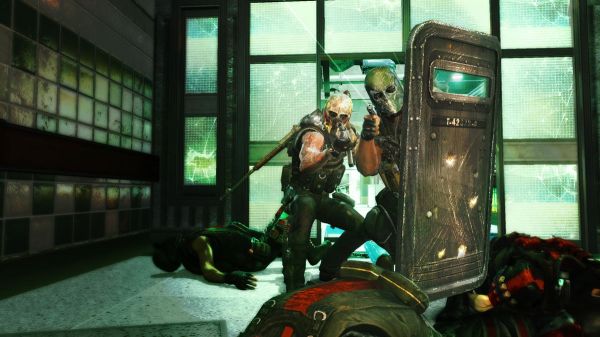 Army of Two: The 40th Day has had a strong showing to date, and the latest previews and media coming out of the Tokyo Game Show are no exception.

We looked at the game's weapon customization back at PAX and came away with some favorable impressions.  Thoughts of iron sights on shotguns, pistols, assault rifles, and rocket launchers danced in Jim's head.  Could his dream become a reality?  Only time will tell, but for now Kotaku has some hands on with the builder.

Next up is Joystiq who got some detailed hands on time with the game.  One of the complaints about the original was just how scripted it felt, and how at times you couldn't take it seriously.  It seems that EA has corrected the issue by creating a darker and more mature game with lots of choices for the players.

From the get-go of the demo, it's evident that the tone of the sequel is darker, and far more mature than the first. Morality choices may be the game design mechanic du jour, but it's successful for a reason: the hostage situation at the demo's start was intense and nerve wracking. The level design especially feels much more dynamic and interesting than before.

Even though Joystiq wasn't particularly impressed with the graphics, the latest screenshots look pretty good to us.  With a few months yet till the game's release, it'll only get better.