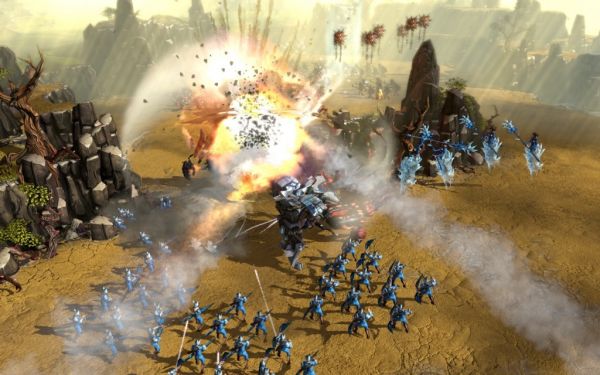 Battleforge has had quite the wild ride in it's two months of existence.  The game launched back in April to great reviews, but users and reviewers complained about the initial costs combined with the costs of booster packs.  EA responded shortly after dropping the price, and then more recently cutting the price all together.

In a recent interview with Kotaku, EA CEO John Riccitiello commented on the status of how the newly priced game is working out.

"I feel like you're sort of asking me how the party's going, but the party starts at nine and it's 10 to nine," he said. "I don't have enough good data to give you a great answer. I would say that, as a packaged goods product competing with high-end PC games, it's a highly-polished experience that provides really good core-gamer-satisfying experience. As an intellectual property, it has an exceptionally narrow audience of people willing to pay $49 for that. … It was a product that, if this was a model shop, it's the group that builds ships in a bottle. It's a really small audience, and we found them. Not that many of them. As a free to play game, it's got 25x the production values of anything out there that's comparable."

It's a good point that the game is head and shoulders above the rest of the "competition" in the free to play category.  By making it free they instantly expanded the audience of folks willing to try it, and as such, people willing to pay for the addons.

Like we said earlier, we really liked the game's cooperative modes and had very little to complain about apart from the pricing.  EA has solved this, so now there's even less to complain about.