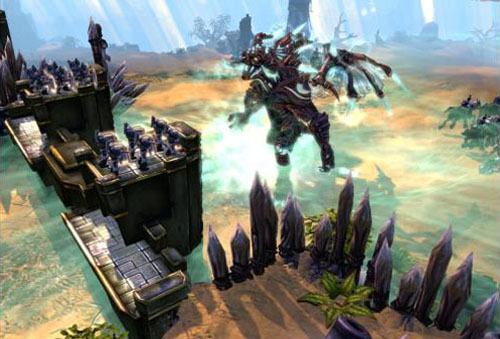 BattleForge, EA Phenomic's card-trading-meets-RTS game, has received another expansion entitled the Lost Souls Edition. As you might recall, BattleForge is a free-to-play game where you can purchase BattleForge points for real money which you can then use to buy booster packs in-game or use to trade with other players for specific cards via an auction system. The Lost Souls Edition introduces 120 new cards, 28 of which are from the Twilight and Lost Souls factions (14 of each), previously only seen as enemies in the game.

BattleForge's website gives a description of these new factions along with the unique dual orb combination options they present:

The Lost Souls have waded the Wailing Lands for countless centuries trying to return to the Peaceful Light. With little hope to ever end their eternal suffering they have now turned to the Forge of Creation and are willing to follow the Skylords in battle. The powers of Frost and Shadow will allow you to call for their aid.

Being caught in the in-between the Lost Souls have marvelous powers at their command no mortal could ever dream of. They make explicit use of their current state and know both the art of corruption and assistance. They are not to be underestimated because destroying the already dead might turn out to be a challenging endeavor.

Ever since they fell prey to the curse, the Twilight have been known for their insane desire to destroy and assault. But they have now been pestering the lands of Nyn long enough! Lacking any common culture or leader they have always gathered among the most powerful of their own kind. But since you, Skylords, have proven to be even more powerful than any of them, they have now chosen to follow you instead.

To be summoned they require the powers of Fire and Nature. But since they formerly belonged to all kinds of affiliations they are now the most diverse faction at your command. In battle they make use of their transformative powers and also spread the Twilight Curse among other troops. Encounters with the Cursed ones might thus have unexpected consequences.

The Lost Souls edition further expands the concept of dual orbs. Again two new factions are going to be introduced that are not governed by one power alone but are able to tap into a second power. Thus they unlock additional special abilities or are generally more flexible and will prove valuable additions when you create your new decks.

Lost Souls Edition Booster Packs can be purchased at the in-game store for 250 BattleForge points, which translates to $2.50 USD.