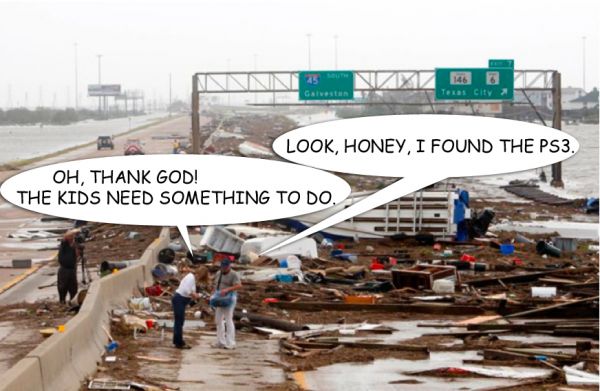 As hurricane season nears for southeast Texas, the local news outlets here are scrambling to bring advanced coverage and hurricane-related articles regarding safety and accident prevention. It's great to see Houston communities coming together...you could even call it co-op. (See what I did there?)

This year, the Houston Chronicle featured a story that set it apart from the usual crime-ridden content, and managed to put a negative spin on what was a pretty decent concerted effort by Houstonians to get the city back up and running after hurricane Ike last year.

Before I dig into the Chronicle's article, let me precede with a personal touch... To anyone somewhat familiar with our staff here at Co-Optimus, you may recognize the following paragraph:

Ironically, "txshurricane" has lived up to his moniker twice three years: hurricane Rita wreaked havoc in Beaumont in September 2005, inspiring him to relocate and take a position as a ship agent in Houston, where hurricane Ike devastated thousands of homes in September 2008.

While our family came through Ike pretty much unscathed, hurricane Rita did a number on our hometowns of Beaumont and Silsbee. This was before my wife and I had begun dating, so our respective experiences are different. As for my two brothers, parents, and I: after six days of waiting in line for gas and living out of our suitcases, we returned against the city officials' better judgement to begin restoring our home and helping others do the same. For thirteen days we cleared out refrigerators (my parents' two fridges, and my bachelor pad fridge), moved fallen trees, and shuttled gasoline back and forth for our small generator. justabaldguy's family in their temporary Safe Room, watching the news

This generator kept one large room in the house running, plus the refrigerator and washing machine. We had the living room sealed off for the sake of conserving cold air, but you can bet your Gamerscore we had the TV and video games hooked up! It was all you could do to keep sane, unless running around town with a chainsaw being charitable suited your fancy (don't worry, I'm not that shallow -- we all put in plenty of hours every day helping our neighbors). I have fond memories of playing splitscreen Medal of Honor: European Assault, Lord of the Rings: The Return of the King, and best of all: Freedom Fighters.

Unfortunately, not everyone reads the directions that come with their home generators. Despite numerous sources for safety information, some people just can't grasp the concept of a gasoline engine. According to the Chronicle:

Memorial Hermann emergency professionals discovered the link between video games and carbon monoxide poisoning as they questioned the children about what they had been doing. At first they heard, ‘We were playing.’ A second group said they were playing video games. The third group had been doing the same — and the team began to ask more probing questions, said David Baylor, safety coordinator for Memorial Hermann’s Center for Hyperbaric Medicine.

The hospital treated 37 patients in 13 carbon monoxide poisoning incidents in the first 36 hours after the storm. Of the patients, 20 were younger than 18. Researchers determined why a generator was used for nine of the incidents and the five episodes that involved running video games accounted for 75 percent of the juvenile poisonings.

Well, duh! When there is a city-ordained curfew all day, the cable TV stations are down, and the internet is not available...most kids are going to read books or play video games. Really: someone didn't think of this before?

If someone took a tally of each gallon of gas used to entertain the family, they'd be taking inventory of enough gasoline to keep a fleet of refinery trucks running for six months. No, I don't have a source - that's an estimate; but you get the idea. It happens. People play games in church, on the train, at work...even while they're driving. Of course they're going to play games when they're bored on their butts for two weeks. The problem is less why people were using the generators and more how they were using them.

The rest of the article is pretty negative, featuring quotes from people who are experts in their field finding links to subject matter that they are most definitely not experts in. But it's interesting to see this kind of coverage, and it provides "the straights" with another reminder that gaming is not just a random craze...but a valid, constructive, and safe way to pass the time.

Except when you're not properly venting the exhaust. A big "thank you" to James Wyatt -- aka justabaldguy -- for sharing these pictures. These were taken during the course of hurricane Ike in September 2008. We have some other Houstonians and coast-dwellers here at Co-Optimus, and we're all grateful for the safety of every one.